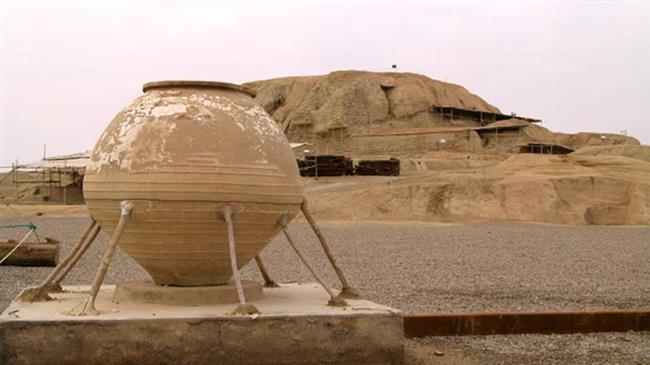 TEHRAN, Young Journalists Club (YJC) - Following climate changes at the end of the seventh millennium BC, which led to formation of grasslands, the cave dwellers of the Iranian Plateau started living in plains, among which Tappe Sialk site is probably the oldest location discovered so far.

The entire Sialk civilization is thought to have originated from the pristine large water sources nearby which still exist.

A large number of farm animal bones discovered at the site suggest that the dwellers of Sialk were meat eaters of domesticated animals.

Artifacts excavated from the site, including some very fine painted potteries, are currently on display at the Louvre, he British Museum, the Metropolitan Museum of Art in New York, the National Museum of Iran and some others are at private collections.

The ancient site comprises two hills, nearly 600 meters apart, in the northern and southern sides. The northern mound is 25 meters high and the southern one is six meters high.

Archeological investigations conducted during the 20th century have divided the history of the settlement into six cultural periods. The northern mound was made during the first and second periods.

During the first period rudimentary architecture emerged which included huts made of reed and covered with mud. The ceramic produced at the time was initially rather rough but its quality improved with the time.

In the second period, which dates back to nearly 5,500 BC, the residents were hunting, farming and herding.

Hand-made bricks were being used as the main construction material and the remains discovered from this period show signs of developing technology.

The third period started in 4,000 BC, when the dwellers moved from the northern mound to the southern side. During this era, the Iranians probably became the first people who invented pottery wheels which enabled them to produce more subtle shapes by clay.

They also heated ceramics in furnaces in which temperature could be controlled manually. Artistic designs on pottery works also became more intricate and paintings of humans were used as well.

Cultivation of wheat and barley and commercial interactions based on the two agricultural products were also introduced by Iranians during this period.

Iranians also started production of silver from mines and manufactured silverware during this period.

Evidence shows that Tappe Sialk was an important hub of metal production in central Iran during the third and fourth periods of the settlement.

The fourth period of Sialk history started around 3,000 BC, when writing system was introduced. The settlement experienced a remarkable commercial boom at the time and its population grew significantly.

The ruins of what is considered to be the oldest Ziggurat in the world date back to this period.

After an abandonment of more than a millennium, the Sialk was reoccupied for two more periods. The archaeological remains of these two periods have been mainly discovered in the two necropolises, known as necropolis A and necropolis B.

The archeological discoveries of the fifth period, which started nearly 3,200 year ago, included weapons and other objects in bronze, as well as jewelry, and some iron items.

The ceramic in this period was gray-black, or red, which were sometimes decorated with geometric patterns.

The new settlers who occupied the Sialk around 2,900 years ago built their homes on the ruins of the previous period, completely destroying the architectural remains of the former dwellers.

Considering the fact that Tappe Sialk can provide priceless information with regard to the history of human civilization, archeologists around the world have launched a campaign to preserve the site.

In a conference held in London this week, scholars and archeologists from different parts of the world decided to form a consultative committee to set up a digital data base and launch a website for Tappe Sialk. The scholars also decided to sum up their studies in the course of two future conferences in France and Germany.