TEHRAN, July 06 - Iranian President Hassan Rouhani said Tehran will continue cooperation with Europe in their multilateral nuclear deal if the remaining parties to the landmark accord can meet Tehran's expectations during their upcoming ministerial meeting. 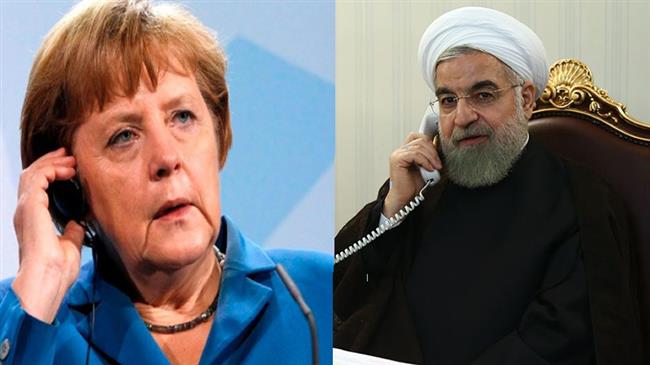 TEHRAN, Young Journalists Club (YJC) - Foreign ministers of Iran and the five remaining parties to the 2015 nuclear deal, known as the Joint Comprehensive Plan of Action (JCPOA), are scheduled to meet in the Austrian capital Vienna on Friday to discuss ways of maintaining the international accord after the US’ withdrawal.

In a telephone conversation with German Chancellor Angela Merkel on Thursday night, Rouhani noted that the US withdrawal from the JCPOA has caused some problems in economic areas, banking transactions and oil sector for the foreign companies which have made investment in Iran, making them reluctant about continuing their operations in the country.

Rouhani described a package proposed by Germany, France and the UK with regard to their future plan on how to fulfill their obligations under the JCPOA as "disappointing" and noted that there was no action plan or "a clear method in the proposed package for the continuation of cooperation and, similar to the previous EU statements, it only contained general commitments."

Merkel explained that the European countries' package pointed to the general principles at this stage, noting that negotiations should continue over the details.

The German chancellor underlined Europe's determination to remain in the nuclear deal, adding that negotiations should continue with patience.

Since US President Donald Trump pulled Washington out of the historic nuclear deal, European countries have been scrambling to ensure that Iran gets enough economic benefits to persuade it to stay in the deal.

In another phone conversation with French President Emmanuel Macron on Thursday night, Rouhani described Paris' efforts to save the nuclear deal as "positive" but noted that "Europe's proposed package for keeping up cooperation in the JCPOA does not meet all our expectations."

The Iranian president expressed hope that the Friday session of the foreign ministers of the remaining JCPOA signatories -- Russia, China, France, Britain and Germany -- would meet Iran's demands for staying in the deal.

Rouhani pointed to the recent financial and banking problems caused for some European companies operating in Iranian projects following the US' unilateral withdrawal from the JCPOA and said Tehran expects Europe to offer a transparent action plan with a timeline which can compensate the risks caused by the US exit.

Macron, for his part, underlined France's commitment to the JCPOA and stressed the need for continuation of cooperation and dialogue to keep the nuclear deal in place.

The French president expressed hope that the Friday meeting could create a desirable balance between the political and economic issues for further cooperation.

Also on Thursday, Chinese Foreign Minister Wang Yi has urged all the remaining parties to Iran's nuclear deal to stay in the agreement.

Speaking at a news conference in Vienna on Tuesday, Wang described the scheduled ministerial meeting as "necessary."

"I am sure that we will send a united, determined and strong signal and confirm that we as treaty members will hold on to the deal," he said.

Earlier this month, experts from the six countries held a meeting behind closed doors in Tehran on the fate of the Iran deal.

A Joint Commission meeting had also been held at the level of deputy foreign ministers in Vienne in late May.

Trump announced on May 8 that Washington was walking away from the nuclear agreement, which was reached between Iran and the five permanent members of the UN Security Council - the United States, Britain, France, Russia and China - plus Germany in 2015.

Trump also said he would reinstate US nuclear sanctions on Iran and impose “the highest level” of economic bans on the Islamic Republic.

The remaining parties have vowed to stay in the accord.