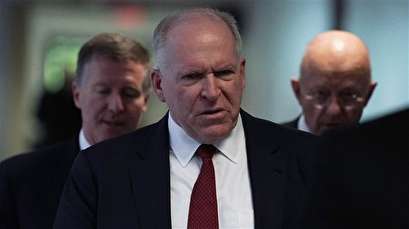 TEHRAN, Young Journalists Club (YJC) - Brennan made the comparison in a Friday tweet between Trump and Bernie Madoff, who has been convicted in the largest financial fraud in US history.

“You are to governance & politics what Bernie Madoff was to the stock market & investment advice. The two of you share a remarkably unethical ability to deceive & manipulate others, building Ponzi schemes to aggrandize yourselves,” the former CIA chief tweeted. “Truth & justice ultimately caught up with Bernie.”

Madoff oversaw the largest financial fraud in American history, with prosecutors estimating that he cheated clients out of $64.8 billion. He pled guilty to 11 federal felonies in 2009 and was sentenced to 150 years in prison.

Brennan’s comment came in response to a Thursday night tweet from the US president about America’s place on the global stage.

“Thanks to REPUBLICAN LEADERSHIP, America is WINNING AGAIN - and America is being RESPECTED again all over the world. Because we are finally putting AMERICA FIRST!” Trump wrote on his Twitter page.

Brennan, who directed the CIA between 2013 and 2017, has on several occasions and publicly criticized Trump’s policies on Russia since he left the agency.

The US president has in retaliation shot back at Brennan over his scathing slights, saying the ex-CIA director has “disgraced himself” and he is the “one man who is largely responsible for the destruction of American’s faith in the intelligence community.”

Trump has been accused of undermining the intelligence community by questioning its findings in regard to Russian hacking efforts in favor of him amid the US 2016 presidential vote.