TEHRAN, July 07 - Hundreds of protesters calling for an end to gun violence in Chicago partially shut down a major freeway in the city on Saturday, July 7, restricting traffic as they demanded lawmakers and members of the community do more to stop the bloodshed. 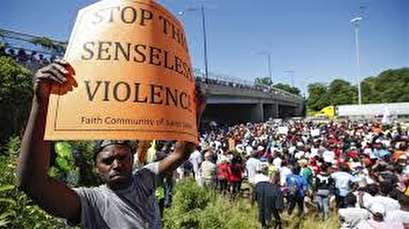 TEHRAN, Young Journalists Club (YJC) -Chanting slogans, including "Black Lives Matter!" and "Shut It Down!", hundreds of demonstrators marched along two of the freeway's four lanes watched by lines of police.

Illinois State Police said agreement was reached with organizers of the protest to allow the demonstrators restricted access to Interstate 94, known as the Dan Ryan Expressway, "to march peacefully for their cause."

Chicago leaders have long struggled to bring down its high murder rate. Even though homicides fell 16 percent last year, the third largest US city still ranked No. 1 in murders, with more than the combined total for New York and Los Angeles, the two largest cities.

Chicago Mayor Rahm Emanuel supported the demonstration, saying on Friday, July 6, that it was important to raise awareness.