TEHRAN, July 08 -Nicaragua's President Daniel Ortega on Saturday ruled out early elections as demanded by opposition protesters in the country where more than 220 have died in unrest since April. 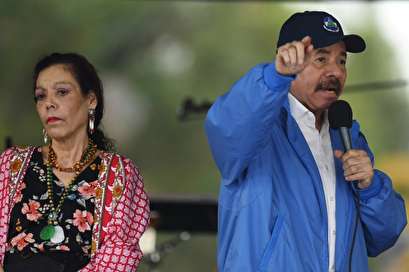 TEHRAN, Young Journalists Club (YJC) -Nicaragua's President Daniel Ortega on Saturday ruled out early elections as demanded by opposition protesters in the country where more than 220 have died in unrest since April.

"Here the rules are set by the Constitution of the Republic, through the people. You don't just change them overnight because a group of coup plotters got the idea to do so," Ortega said at a rally of his supporters.

Roman Catholic bishops are working to mediate dialogue between the government and opposition in a bid to end the protests and government repression that have wracked the country since April 18.

Ortega, 72, had previously remained silent on a proposal by the influential Catholic hierarchy to bring forward elections scheduled for 2021 to March of next year.

The mediation committee said on Thursday they would convene a new round of talks on Monday at 10:00 am.

The protesters demand the resignation of Ortega, a former leftist guerrilla who came to power with the popular uprising that defeated dictator Anastasio Somoza in 1979, and retook the presidency in 2007 after a vote.

Activists accuse him -- together with his wife Vice President Rosario Murillo -- of establishing a dictatorship characterised by nepotism and brutal repression.

"We shall see if the people will give their vote to the coup plotters who in these past weeks have carried out so much violence," Ortega said, stressing that: "There will be a time for elections. Everything has its time."

Thousands of Ortega supporters attended the rally in Managua where he spoke on Saturday.

"Down with the coup plotters!", "Not one step backward!", "Stay, my commander stays!", "We want peace," they shouted, waving flags of the ruling Sandinista National Liberation Front.

The march set out from the Plaza de las Victorias toward the Hugo Chavez Rotunda, where a colorful metallic structure of the bust of the deceased Venezuelan socialist leader is surrounded by gigantic metal life-sized trees installed by Ortega's wife.

"I'm supporting Comandante Ortega, the only one who has watched over the poor against the right-wing coup, which is lying... the hooded are theirs, the ones who are assaulting people," Guillermo Ramirez, a 43-year-old mason, told AFP.

The US has cranked up its pressure on Ortega to make progress in the struggling peace negotiations.

Also sanctioned was Jose Francisco Lopez Centeno, an oil executive the US Treasury alleged had siphoned off millions of dollars from two government-linked companies for his own benefit and that of Nicaragua's leaders.

"The violence and repression seen in Nicaragua since demonstrations began in April are products of the systematic erosion of human rights over the years, and highlight the overall fragility of institutions and the rule of law," Zeid said.

"I call on the government to cease state violence and to dismantle the pro-government armed elements that have been increasingly responsible for repression and attacks."