TEHRAN, July 08 - The French government says the United States should expect "united and strong" retaliation from European countries if it moves to impose more tariffs. 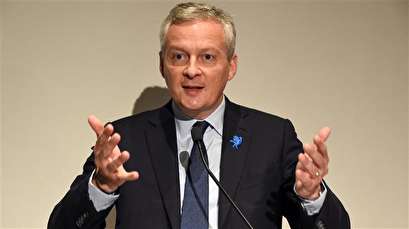 TEHRAN, Young Journalists Club (YJC) -"If tomorrow there is an increase in tariffs, like in the car industry, our reaction should be united and strong to show that Europe is a united and sovereign power," French Finance Minister Bruno Le Maire said in an address to an economic conference in Aix-en-Provence, southern France, on Sunday.

"The question is no longer whether or not there will be a trade war, the war has already started," he added.

On June 10, the administration of US President Donald Trump imposed 10 percent tariffs on aluminum imports and 25 percent tariffs on steel imports, which mainly affects the EU, Canada, and Mexico, ending exemptions that had been in place since March.

Trump argued at the time that enormous flows of imports to the US were putting in jeopardy the American national security, and made an odd departure from a decades-long US-led move towards open and free trade.

He further escalated tensions last month with threats to impose up to 20 percent tariffs on all cars and car parts manufactured within the EU, a move that could upend the industry's current business model for selling cars in the US.

German Chancellor Angela Merkel, whose country is facing the threat of higher US duties, said on Thursday that she may support an initiative to reduce European Union tariffs on US car imports as the bloc seeks to avoid more levies on its car exports.

Merkel said the door was open for negotiations on how to handle tariffs with the US so that the EU could avoid a further deterioration of trade relations with Washington under President Trump.

The EU has introduced tariffs of 25 percent on a range of US goods to compensate for Trump’s controversial tariffs on European metals. The bloc imposes a 10 percent tariff on imported US cars.

According to World Trade Organization rules, the EU cannot reduce import tariffs for only US-made cars but for all WTO members.

The European Union on Monday warned Washington that imposing import tariffs on cars from the bloc could lead to “countermeasures” against nearly $300 billion worth of US exports.

In a 10-page submission to the US Commerce Department, the European Commission, which handles trade policy for the bloc's members, blasted the tariffs on vehicle imports from Europe and warned that such measures would harm America’s own automotive industry.

French carmakers would not be highly affected by US tariffs because they have little exposure to the American market. However, the French government is concerned that the country's carmakers would face stiff competition from Asian producers if EU tariffs were cut.

Meanwhile, global automakers have also warned that imposing the tariffs on car imports would raise prices of imported vehicles by up to $6,000 per car and lift prices of locally made cars.

The US president said on Wednesday the European Union is "possibly as bad as China" on trade, as possible trade wars loom with both the Asian giant as well as longtime allies in Europe and Canada.

"The European Union is possibly as bad as China, only smaller," Trump said during an interview with Fox News, adding, "They send a Mercedes in, we can't send our cars in. Look what they do to our farmers. They don't want our farm products. Now in all fairness they have their farmers ... But we don't protect ours and they protect theirs."

The US has complained about Chinese policies that Washington says either force companies to relinquish key technology or allowed China to steal it outright.

The so-called Made in China 2025 initiative, a strategic plan by Beijing to upgrade Chinese industry, stands at the heart of the trade war between the US and China. The US government believes the plan is a major threat to US technological leadership and economic dominance.