TEHRAN, July 08 - Syrian army troops have managed to regain control over yet another strategic town in the country’s southwestern province of Dara’a following the elimination of the last gatherings of militants in the area. 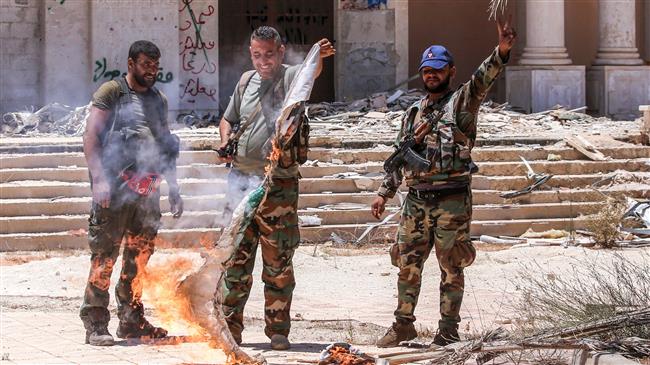 The report added that the liberation of Um al-Mayazen came after days of intense operations against militants’ gatherings and their fortified positions in the town, situated not far away from Nassib, another town near the Jordanian border, which was liberated on Friday.

Syrian bomb disposal units are now combing the liberated area for hidden ordnance and explosive devices, which foreign-backed terrorists have arguably planted there to slow down the advance of army forces.

Since June 19, the Syrian government has been engaged in a major military campaign to recapture the militant-held areas in southern Syria near the Jordanian border and the Israeli-occupied Golan Heights, including Dara’a province, together with the neighboring provinces of Quneitra and Suwaida.

The recapture of Dara'a is highly important because it borders the occupied Golan Heights which Israel has used to treat wounded militants that are fighting the Syrian government since 2011.The territory's return to the Syrian government control would cut the much-reported collaboration between Israel and the militants and accordingly deal a blow to Tel Aviv's plans to annex the Golan Heights.

The Syrian army's advances are also upsetting to US plans in the Arab country where it is believed to have deployed about 2,000 troops to carve out a statelet in the country's north with the help of Kurdish militants.

Meanwhile, the so-called Syrian Observatory for Human Rights (SOHR) reported that tens of thousands of internally displaced people had returned to their homes in southern Syria since a ceasefire deal signed on Friday between the Russian military and militant outfits to end airstrikes against their positions.

The UK-based monitor also said the returns were continuing on Sunday.

Moscow launched its military campaign against Daesh and other terror outfits in Syria in September 2015 at the Damascus government’s request. Russia's airstrikes have significantly helped the Syrian forces deal heavy blows to foreign-backed militants operating in the Arab country.

Under the truce deal, the government forces were to deploy along the frontier with Jordan, while militants were to hand over their heavy weapons. The militants who oppose the deal will be evacuated with their families to the militant-held northwestern province of Idlib.