TEHRAN, July 07 - President Recep Tayyip Erdogan has reiterated Turkey’s determination to eradicate the threat of “terror”, saying Ankara will continue its military operation in northern Iraq until the elimination of the outlawed Kurdistan Workers' Party (PKK). 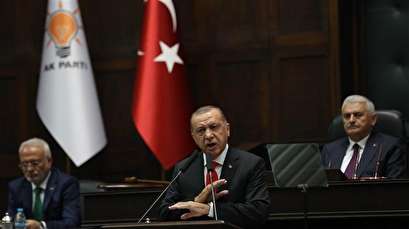 TEHRAN, Young Journalists Club (YJC) - "We won't stop until we completely wipe off terror from our borders. The operations will continue until the PKK terror group is removed from Qandil and if needed from Sinjar," Erdogan said, while addressing members of his ruling Justice and Development Party (AK Party) in parliament on Saturday.

In recent months, Ankara has stepped up air raids against suspected PKK positions in northern Iraq, particularly its stronghold in the Qandil Mountains. The Turkish government has said it might launch a ground offensive into the rugged area, where top PKK members are believed to be stationed.

On June 8, Turkish Prime Minister Binali Yildirim said troops had been “deployed in a 300-kilometer area, in 30 kilometers deep in northern Iraq” for a declared goal of eliminating PKK militants. His comments came just a day after Erdogan said Ankara might strike the Iraqi city of Qandil “at any moment one evening.”

Turkey has carried out frequent airstrikes against PKK targets in northern Iraq. Ankara conducted cross-border operations in the region in the 1990s and 2000s. A shaky ceasefire between the Turkish government and PKK that had stood since 2013 was declared null and void by the militants in 2015 in the wake of a large-scale Turkish campaign against the group.

In late March, Ankara said it had begun operations against Kurdish forces in Iraq's Sinjar region, despite Iraq's announcement that no foreign forces had crossed the border into the country. A few days later, Iraq also started deploying forces in Sinjar.

The Turkish government has said it would attack northern Iraq if the central government in Baghdad and the United Nations do not take steps to eliminate PKK militants. It also claims the Makhmur camp, which is located 100 kilometers south of the Kurdistan Regional Government (KRG)’s capital Erbil and was purportedly overrun by PKK militants, must be shut down due to security threats.

The Iraqi government, however, has time and again strongly denounced any violation of its sovereignty and territorial integrity, including those committed by Ankara, saying any foreign anti-terror operation inside the Arab country must be conducted based on Baghdad's permission.

In his Saturday speech, Erdogan also pointed to a deal reached between Turkey and the United States in June that envisages the withdrawal of Washington-backed Kurdish militants from Manbij district in northern Syria. The Turkish president said "powers which have been supporting terror groups in our region for a long time have understood Turkey's decisiveness in the war against terror, and have started to seek ways of reconciliation."

The Syrian government has given a degree of authority to the Kurdish regions to run their own affairs in the face of foreign-backed militancy. The US, however, has used the vacuum to establish a foothold in those regions with the help of militants.

The US angered Turkey by announcing a plan for the formation of a Kurdish militant force in Syria near the Turkish border, prompting Ankara in January to launch a cross-border military operation inside Syria, code-named Operation Olive Branch, with the declared aim of eliminating the Kurdish People’s Protection Units (YPG) from northern Syria, particularly the Afrin region. Turkish troops captured Afrin in March, claiming that they had killed scores of YPG militants until then.

Earlier this year, Erdogan had threatened to push its Afrin offensive against the YPG militants eastward to Manbij, where US forces are stationed, risking confrontation between the two NATO allies.

However, Washington agreed to withdraw the US-backed Kurdish militia from Manbij. This clearly paved the way for Turkish troops to capture the volatile town in a move considered in line with the same US-Turkey deal which was sealed in June.

Ankara views the YPG, an offshoot of SDF, a terrorist organization linked to the homegrown PKK militant group, which is seeking independence from Turkey through militancy for decades now.

Elsewhere in his Saturday remarks, Erdogan, who won the majority of votes in the presidential elections of June, said he would name the cabinet he has selected on Monday, renewing a promise to tackle what he called the "structural problems" of the country's economy.

Erdogan won 53 percent of the votes, extending his 15-year grip on power with vastly expanded authority over the legislature and judiciary narrowly backed by Turks in a referendum last year.

"As the first president of the new executive presidential system, I will announce the cabinet at 9 pm on Monday... God willing, we will hold our first cabinet meeting on Friday," he said.

"We will take our country much further by solving (these) structural problems of our economy."

"With the power granted to us by the new presidential system, we will be getting quicker and stronger results," Erdogan said.