TEHRAN, July 09 -Syrian President Bashar al-Assad says his top priority is the reconstruction of his country, which has been gripped by foreign-backed militancy since March 2011. 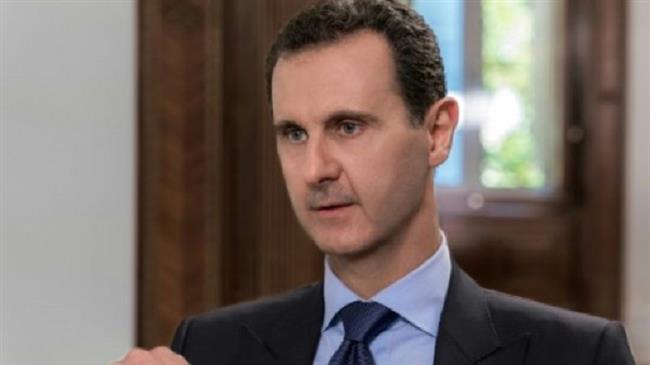 TEHRAN, Young Journalists Club (YJC) - "Reconstruction is the top priority in Syria, backed up by the continued fight against terrorism," Assad said on Monday during a meeting with Foreign Minister Walid al-Muallem and other Syrian diplomats in Damascus.

The years-long militancy has badly damaged the country's infrastructure, including electricity and water systems, schools and hospitals, and other institutions needed for daily civilian life.

In 2017, the World Bank estimated the cost of war-related losses in Syria at $226 billion.

Assad, who has estimated rebuilding would cost $200 billion at the very least, has insisted he would refuse Western contributions.

In an interview in June with Russia's NTV network, Assad said the West "won't be part of reconstruction in Syria, because very simply we won't allow them to be part of it, whether they come with money or not."

The Syrian leader has also stressed that he does not think it is worth pursuing negotiations with the administration of US President Donald Trump to reach an understanding over the crisis in his country.

The strikes have on many occasions resulted in civilian casualties and failed to fulfill their declared aim of countering terrorism.

Damascus says the US and its Western and regional allies are aiding Takfiri terrorist groups operating inside the Arab country, while the Tel Aviv regime's military carries out sporadic strikes against Syrian government forces.

The Israeli regime, one of Washington’s top allies, has even set up field hospitals to treat wounded militants evacuated from Syria.

Furthermore, the Syrian army has repeatedly seized huge quantities of US and Israeli-made weapons and advanced military equipment from the foreign-backed militants inside Syria.

Syrian army forces have made significant advancements against Takfiri terrorists in the various parts of the country in recent months.

On Monday, the Syrian head of state also said his government would focus on amending legislation, the return of refugees who fled because of "terrorism" and reactivating the stalled political process.

Over six million Syrians have been internally displaced by the conflict, while another five million have fled to neighboring countries.

A Lebanese official has said that Lebanon and Syria were working together to facilitate the return of thousands of refugees who are willing to head home.

"There are contacts with the Syrian authorities about thousands of Syrians who want to return to Syria," Lebanon's head of the General Security agency Major General Abbas Ibrahim told reporters on May 31.

The official did not give a timeframe for the return of refugees, but noted that some part of the plan would take place in the short term.