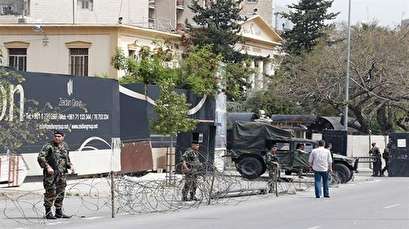 TEHRAN, Young Journalists Club (YJC) - The tribunal, chaired by Brigadier General Hussein Abdallah, issued the verdicts against Fadi Hashem, Charbel Hashem, Maroun Hashem and Lina Aanid on Tuesday after they were found guilty of crossing into occupied Palestinian territories, working with Israeli officials and receiving permits to live there.

The court also stripped them of their rights as Lebanese citizens.

Three other defendants, identified as Salam Fakhoury, Assad Saqr and Antoinette al-Nadaf, were each sentenced in absentia to 15 years of hard labor for collaborating with Israel.

The military tribunal also revoked the nationality of the trio.

The media office of Lebanon’s General Security Directorate announced in a statement that the quintet had confessed to passing information to Mossad via Israeli embassies in Turkey, Jordan, Britain and Nepal.

The statement stressed that the individuals were arrested following intensive monitoring of Israeli intelligence operations in the country as part of Lebanon’s activities aimed at dismantling similar networks.

It added that the two spies from Nepal were also engaged in recruiting other Nepalese workers in Lebanon.

“After their interrogation, the arrestees were referred to the competent court on the offense of collaboration with the Israeli enemy, and work is underway to arrest the rest of the people involved,” the statement pointed out.