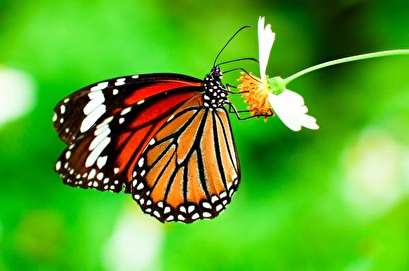 In field experiments, scientists at the University of Michigan grew four milkweed species under varying atmospheric conditions. The plants were exposed to different levels of carbon dioxide concentration. Afterwards, the plants' leaves were analyzed before being fed to monarch butterfly caterpillars.

Researchers found the species of milkweed with the largest cardenolide concentrations under normal growing conditions produced lower amounts of the protective compounds when exposed to greater CO2 concentrations.

Scientists found caterpillars fed the milkweed exposed to elevated CO2 levels were less able to tolerate a common parasite. The monarch butterflies' lifespan was also reduced by an average of a week.

"We discovered a previously unrecognized, indirect mechanism by which ongoing environmental change -- in this case, rising levels of atmospheric CO2 -- can act on disease in monarch butterflies," researcher Leslie Decker said in a news release.

Researchers suggest rising CO2 levels could reduce other medicinal compounds found in different plants, which include compounds used by humans for a variety of drugs.

Monarch butterflies are already plagued by a loss of habitat and other environmental threats. Now, the latest findings -- published in the journal Ecology Letters -- suggests they will be more susceptible to parasites in the future.