TEHRAN, July 11 - NATO has once again accused Russia of what it sees as destabilizing eastern Ukraine as members of the Western military alliance gather for a summit in Brussels. 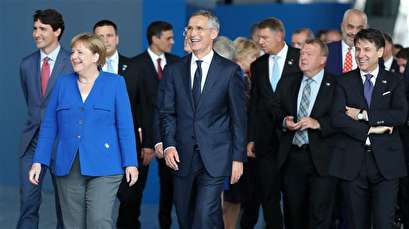 TEHRAN, Young Journalists Club (YJC) -NATO leaders issued a declaration at the summit in the Belgian capital on Wednesday, whereby they expressed concern about reduced security at NATO borders as a result of what they said were Russia’s activities, including its “destabilization of eastern Ukraine.”

Russia and the West have been at odds over Ukraine since a political crisis erupted in the country in late 2014. The West is also angry at what it claims to be Russia’s annexation of Crimea, a former Ukrainian territory on the Black Sea and dominated by ethnic Russians which joined the Russian Federation after a referendum four years ago.

NATO members said in the statement that they would remain committed to the security of Ukraine as well as members of the alliance who may be affected by Russia’s increased military activities along its western borders.

In a clear response to US President Donald Trump’s repeated calls for increased contribution of NATO members to the finances of the organization, the statement said that NATO members would remain committed to pledges for increased military spending.

“We reaffirm our unwavering commitment to all aspects of the Defense Investment Pledge agreed at the 2014 Wales Summit, and to submit credible national plans on its implementation, including the spending guidelines for 2024, planned capabilities, and contributions,” read the NATO statement.

It said all NATO members were committed to increasing military spending to reach the 2-percent portion of their overall national income.

“All Allies have started to increase the amount they spend on defense in real terms and some two-thirds of Allies have national plans in place to spend 2% of their Gross Domestic Product on defense by 2024.”