TEHRAN, July 15 -Some 7,000 people have taken to the streets of Tel Aviv to protest against a controversial bill that declares Israel exclusively "the nation-state of the Jewish people." 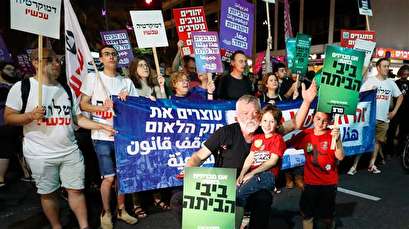 TEHRAN, Young Journalists Club (YJC) -Some 7,000 people have taken to the streets of Tel Aviv to protest against a controversial bill that declares Israel exclusively "the nation-state of the Jewish people."

The bill is expected to come to a final vote at the Israeli parliament (Knesset) on Monday. If passed, it could become part of Israel's basic laws that serve as a de facto constitution.

The draft law prioritizes Jewish values over democratic ones in the occupied territories, declares Jerusalem al-Quds the "capital" of Israel, allows Jewish-only communities, sets Hebrew as the official language of Israel and relegates Arabic from an official language to one with “special status."

In a joint statement, the participating organizations said, “The nation-state law would turn racism, discrimination and segregation into an inescapable part of our lives."

Addressing the protest, Israeli lawmaker Ayman Odeh, who chairs the predominantly Arab Joint List party, said the bill is meant "to stick a finger in the eyes of a fifth of Israel's population, spark a dispute and polarize in order to make a political gain for the Netanyahu tyranny."

Israeli Prime Minister Benjamin Netanyahu has repeatedly said that the passage of the law is one of his top priorities. He hopes to get the bill approved before the parliament begins its summer recess on July 22.

“The nation-state bill won’t make us disappear, but it will massively harm democracy. The large protest was an important step in the fight against fascism," Odeh said.

Under an Israeli regime that "has lost all shame, that fears its own shadow, the majority tramples the minority, legislation is racist and the democratic space is under constant threat," he added.

Lawmaker Tamar Zandberg, who heads Merez party, accused the Israeli regime of pushing for the passage of law in a bid to distract people from the dire situation in the blockaded Gaza Strip.

Rabbi Gilad Kariv, CEO of the Reform Movement in Israel, described the draft law as "contemptible."

"The real score we need to settle is with those elected by the public (members of Knesset) who know deep inside how much the nation-station bill is going to tarnish the Israeli law book, and remain silent nonetheless," he said.

A group of 14 American Jewish organizations have also expressed their concerns about the contentious bill in a letter addressed to Knesset opposition leader Isaac Herzog.