TEHRAN, July 16 - The celebrations marking France’s World Cup championship have been marred violent clashes between the fans and riot police as wells as reports of looting, deaths and injuries across the European country. 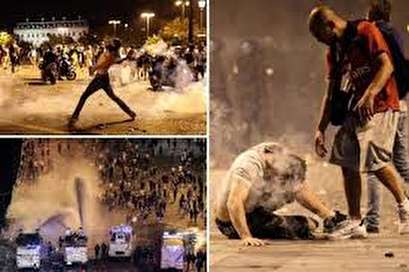 TEHRAN, Young Journalists Club (YJC) -The celebrations marking France’s World Cup championship have been marred violent clashes between the fans and riot police as wells as reports of looting, deaths and injuries across the European country.

In Paris, police used tear gas and water cannon to disperse a large crowd of fans, who flooded the Champs-Elysees Avenue and neighboring streets to party into the night after France beat Croatia 4-2 and won the second World Cup title in the its history.

As the boom of fireworks and firecrackers filled the air, dozens of youths shattered windows at a popular store on the Champs Elysees, according to an AFP journalist at the scene.

Clashes also erupted in the southern city of Lyon between police and about 100 youths who had climbed on top of a police vehicle, according to local authorities.

Police fired tear gas to disperse them, but the youths responded by throwing objects and setting rubbish bins on fire.

Skirmishes were also reported on a bridge as a group of about 50 youths tried to break through police barricades to reach the city center.

Meanwhile, in Frouard, a town outside the eastern city of Nancy, a three-year-old boy and two six-year-old girls were seriously injured after being struck by a motorcycle during the celebrations. Officials said the motorcyclist had fled the scene.

A 50-year-old man also died in the southeast city of Annecy when he jumped into a shallow canal and broke his neck.

A young in his thirties also lost his life after crashing into a tree while celebrating in the small town of Saint-Felix in northern France.

Festivities are expected to resume on Monday afternoon.

Over 110,000 police and security forces had been deployed across the country, 4,000 in Paris, ahead of the Sunday celebrations.

The Paris police chief had warned of a “real terrorist threat” for the gathering, during which the Eiffel Tower remained closed and Champs-Elysees Avenue and a nearby site had been closed to traffic.

France remains on high alert after a string of coordinated attacks in and around Paris killed 130 people in November 2015.