Erdogan on coup anniversary: Turkey 'cut off arms of octopus'

TEHRAN, July 16 -Turkey has marked the second anniversary of a failed coup which President Recep Tayyip Erdogan said had seen the country "cut off the arms of the octopus," referring to US-based cleric Fethullah Gulen. 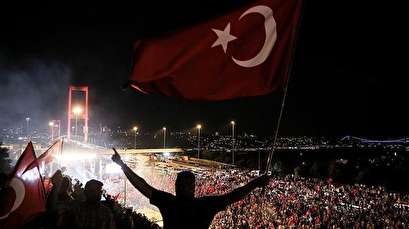 TEHRAN, Young Journalists Club (YJC) -Turkey has marked the second anniversary of a failed coup which President Recep Tayyip Erdogan said had seen the country "cut off the arms of the octopus," referring to US-based cleric Fethullah Gulen.

Erdogan addressed tens of thousands of people who had gathered on an Istanbul bridge, renamed “July 15 Martyrs’ Bridge” after those killed during the 2016 putsch.

Turkey has "cut off the arms of the octopus, the cursed in Pennsylvania that grew with hypocrisy, tricks, lies, and within big secrecy," he said of Gulen.

Elements within the Turkish military used tanks, warplanes and helicopters on July 15, 2016 to overthrow Erdogan who was in the southwestern holiday town of Marmaris.

Clashes took place in Istanbul, Ankara and Marmaris as fighter jets bombed parliament and other spots in the capital, leaving 290 people dead. The coup attempt fell flat after thousands heeded Erdogan's call to take to the to the streets.

Gulen has denied role in the coup attempt, while the United States has refused to extradite him at Ankara’s request, leading to the worst cooling of relations in years between the two NATO allies.

Since the coup, the country has arrested over 75,000 people for their alleged connection to the coup, and dismissed 130,000 civil servants.

Meanwhile, Erdogan has assumed extensive powers after ordering and winning a referendum to change the country’s parliamentary ruling system to a presidential one.

On Sunday, the Turkish presidency issued seven new decrees which abolished the post of the prime minister and tied all state institutions to the president.

Critics say the government has used the coup attempt to crack down on all dissent, in which opposition lawmakers, journalists and political activists have been put behind bars.

Erdogan says the defeat of the coup and his election win are a testimony to Turkey's commitment to democracy.

The lira has seen its worst depreciation in years over fears about Erdogan's drive for lower interest rates and by comments that he planned to take greater control of the economy.

The president, however, says a powerful presidency is vital to drive economic growth, ensure security after the failed coup and safeguard Turkey from war across its southern border in Syria and Iraq.

"We are embarking on this road by using this opportunity as best we can for a strong parliament, strong government and strong Turkey," he said during his inauguration earlier this month.