TEHRAN, July 18 -Sea level rise threatens the internet, according to a new study by researchers at the universities of Wisconsin and Oregon. 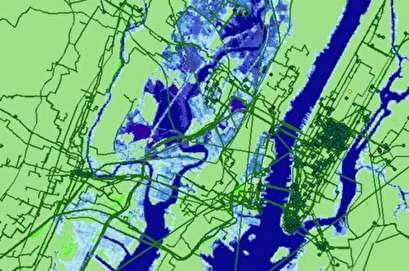 TEHRAN, Young Journalists Club (YJC) -Sea level rise threatens the internet, according to a new study by researchers at the universities of Wisconsin and Oregon.

Thousands of miles of fiber optic cable are laid beneath several major coastal cities. Large swaths of this vital communications infrastructure could be underwater in less than 15 years, researchers warn.

"Most of the damage that's going to be done in the next 100 years will be done sooner than later," Paul Barford, a professor of computer science at Wisconsin, said in a news release.

Most people use wireless technology to connect to the world wide web, and cloud computing remains a popular buzzword, but the internet remains rooted in the ground. In addition to cables, rising seas could damage data centers, traffic exchanges and termination points, all components vital to the information highway as it is currently constructed.

These many components make up what's called the "physical internet." Large portions of the physical internet are spread across major coastal cities, including New York, Miami and Seattle -- all cities threatened by rising seas.

For the latest risk assessment survey, scientists at Wisconsin and Oregon compared the predictions of sea level rise models used by the National Oceanic and Atmospheric Administration with the Internet Atlas, a geographical database detailing the physical internet.

Much of the physical internet relies on traditional rights-of-way. Cables are buried along highways, following coastlines from city to city.

"When it was built 20-25 years ago, no thought was given to climate change," Barford said.

Authors of the new survey detailed their work this week at the Applied Networking Research Conference, a meeting of internet network researchers held in Montreal.

Researchers suggest the best longterm solution to the problem is the relocation of internet infrastructure to higher, drier ground.

"The first instinct will be to harden the infrastructure," Barford said. "But keeping the sea at bay is hard. We can probably buy a little time, but in the long run it's just not going to be effective."