TEHRAN, July 20 - Poland's President Andrzej Duda is hoping to win approval for a November referendum on whether the country's constitution should be changed. 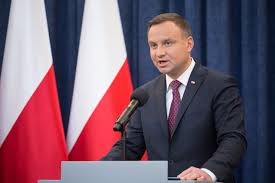 TEHRAN, Young Journalists Club (YJC) - Duda is asking the Senate to give its approval for the Nov. 10-11 referendum.

His announcement Friday comes as the ruling right-wing party is pushing amendments through parliament to its overhaul of the judiciary that will help it appoint the Supreme Court's head and influence the work of judges.

European Union leaders have said the overhaul undermines Poland's constitution and its rule of law and have triggered sanctioning procedures.