TEHRAN, July 22 - Syrian warplanes, backed by the Russian air force, have stepped up strikes against the gatherings of the Daesh Takfiri terrorist group along the Jordan-Israel border in southwestern Syria. 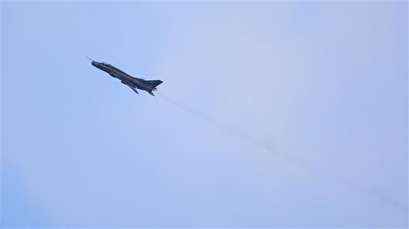 TEHRAN, Young Journalists Club (YJC) - The strikes were carried out on Yarmouk Basin, which borders the Israeli-occupied Golan Heights and Jordan, where remnants of the terror group were entrenched in recent days after other rival militant outfits were routed by the Syrian army in the area, Reuters reported on Sunday, citing unnamed diplomatic and opposition sources.

According to the Syrian military, the agricultural area is the only territorial pocket in Syria's southwest currently held by Daesh, which lost all of its urban bastions in the country late last year. The army also said on Sunday that it had killed “dozens of terrorists” in a campaign whose goal was to crush terrorists.

Russian jets have been conducting air raids against Daesh and other terrorist groups inside Syria upon a request by the Damascus government since September 2015.

The airstrikes have helped Syrian forces advance against anti-Damascus militants, who have been wreaking havoc in the country since 2011.

The development came only two days after Syrian government forces and fighters from popular defense groups liberated nearly two dozen towns and villages in Dara'a and Quneitra provinces. Since June 19, the Syrian army has been conducting a major counterterrorism operation in both provinces.

Syrians continue to recapture key areas from Daesh and other terrorist groups across the country. Syrian forces are now engaged in a battle in the province of Dayr al-Zawr as Daesh struggles to keep its last positions in eastern Syria.

On May 21, the General Command of the Syrian Army and Armed Forces announced in a statement that complete security was restored to Damascus and its countryside after al-Hajar al-Aswad district and al-Yarmouk camp were totally purged of terrorists.

The development was preceded by flushing the Takfiri terrorists out of the towns of Yalda, Babbila and Beit Sahem on the southern outskirts of Damascus.