US trade threats, intimidation will never work on China: Spokesman

TEHRAN, July 23 - Amid an intensifying trade war between China and the United States, Chinese Ministry of Foreign Affairs says the US intimidation and threats "will never work" on Beijing, calling on Washington to maintain a rational attitude in dealing with related issues. 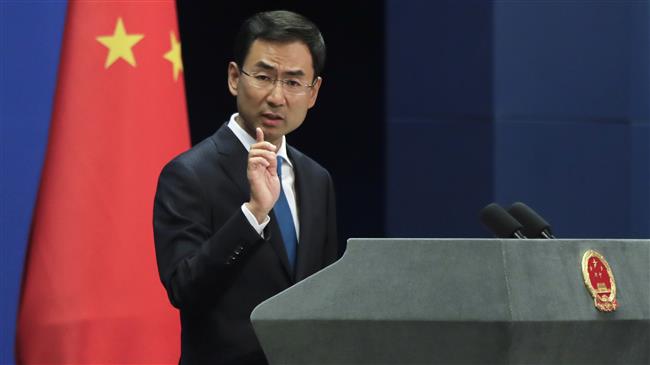 TEHRAN, Young Journalists Club (YJC) - "Firstly, China is not easily scared or intimidated. China has the ability and confidence to safeguard its people's interests. Secondly, we advise the US side to remain calm and maintain a rational attitude in dealing with related issues," China's Foreign Ministry Spokesman Geng Shuang said at a regular news conference in Beijing on Monday.

In an interview with the business channel CNBC on Friday, US President Donald Trump expressed readiness to step up his trade war with China by imposing tariffs on all $500 billion of imports from the world's second largest economy.

Trump added that he was “ready” and willing to slap tariffs on every single Chinese item imported into the US should the need arose.

In early July, Washington imposed 25-percent duties on $34 billion of imports from China as a first step in a possible series of increases that Trump says could affect up to $550 billion of Chinese goods.

China, for its part, announced that its retaliatory tariffs had taken effect on $34 billion of US goods that included soybeans, pork and electric vehicles.

The US administration recently announced that it would impose 10-percent tariffs on an extra $200 billion worth of Chinese goods after China retaliated.

Beijing, in response, blasted American unilateralism and filed a complaint with the World Trade Organization (WTO) against the new US-proposed tariffs.

China also warned the US that it would have no choice but to take “necessary countermeasures” against Washington.

Elsewhere in the presser, the Chinese spokesperson said his country does not need to use competitive devaluation of its currency to aid its exports, stressing, "China's position on this issue has been consistent."

He pointed to the "healthy" performance of the Chinese economy, saying it can offer "ample support for the value" of the country's currency.

The spokesman urged Washington to "handle and resolve the problem in a reasonable manner."

In a pair of tweets on July 21, Trump accused the European Union and China of “manipulating their currencies.”

In another tweet, Trump said that the US “should not be penalized because” it is doing so well.