TEHRAN, July 24 -The administration of US President Donald Trump is attempting to Balkanize and destabilize Iran and other Islamic countries in the Middle East by fomenting unrest and fragmentation in the region, says an American political analyst. 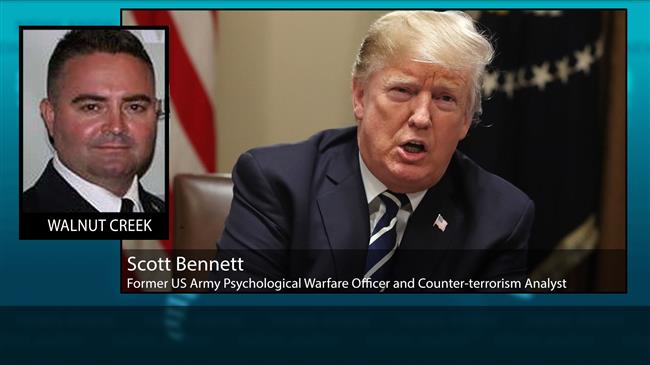 TEHRAN, Young Journalists Club (YJC) - The US government “does not have the best interest of the Iranian people, but instead the Balkanization and disassembly of the Iranian nation and government into a chaos, of factions and infighting and ethnic division,” said Scott Bennett, a former US military psychological warfare officer.

Washington will also “do any other thing that may be exploited that will turn Iran from a solid, coherent, productive country into one of squabbling smaller tribes and factions,” Bennett told Press TV on Monday.

“That’s what they have tried to do to Syria…and it has ended with the failure of that attempt,” he added.

On Sunday, Trump threatened Iran with hardship "the likes of which few throughout history have ever suffered before" as the United States launched a campaign meant to foment unrest in the Islamic Republic.

Trump's pugnacious Tweeter message in all capital letters came following Iranian President Hassan Rouhani's warning to him not to “play with the lion’s tail” after the US unveiled a series of measures which amount to a declaration of war.

NEVER, EVER THREATEN THE UNITED STATES AGAIN OR YOU WILL SUFFER CONSEQUENCES THE LIKES OF WHICH FEW THROUGHOUT HISTORY HAVE EVER SUFFERED BEFORE," Trump wrote.

"WE ARE NO LONGER A COUNTRY THAT WILL STAND FOR YOUR DEMENTED WORDS OF VIOLENCE & DEATH. BE CAUTIOUS!" he added.

Also on Sunday, US Secretary of State Mike Pompeo announced in a speech that the Trump administration had launched a "maximum pressure campaign" targeting Iran and its economy.

The US will pursue a "diplomatic and economic pressure campaign" on Iran, Pompeo said as he appealed to Iranians who fled the country after the 1979 Islamic Revolution, including MKO terrorists.

Iran's Foreign Ministry spokesman Bahram Qassemi on Monday hit back at Pompeo's "foolish and baseless" remarks, saying they are a clear example of US interference in the Islamic Republic's internal affairs.

"The US secretary of state's remarks, especially last night, show that he is still deprived of the necessary knowledge and understanding of the past and present of the Iranians," the spokesman said.