TEHRAN, July 24 -US Ambassador to the United Nations Nikki Haley, a staunch critic of the Kremlin, has said Washington will never trust Russia or its President Vladimir Putin, amid an uproar over President Donald Trump's controversial meeting with his Russian counterpart. 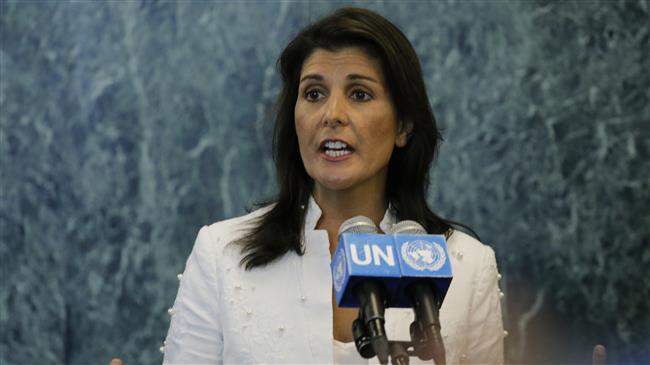 Supporting the move to hold talks with the Russians and making clear Washington's firm position against Moscow, Haley, however, admitted that communication between the two countries and other world leaders "are things that have to happen."

"What I do think is, whether it's the president sitting down with (North Korean leader) Kim Jong-un or whether the president sits down with Putin, those are things that have to happen. You can't get to the end of the other side if you don't have those conversations," Haley said.

"He (Trump) did that with Kim. He's done it with other leaders. He did it with President Xi (Jinping) of China and that's just his way. He feels like he can get more out of them if he goes one-on-one like that. It's his style. It's the way he does it,” she added.

Haley's remarks came one week after the US president held a controversial joint press conference with Putin at a summit in Helsinki, Finland, during which Trump provoked furor by declining to endorse the US intelligence community’s assessment of Russian meddling in the 2016 election.

Speaking after the landmark summit and sparking bipartisan outrage, Trump told reporters in Washington that he had misspoken.

Trump has often implied in his speeches that it would be positive for the US to get along with Russia.

Last week, the White House announced that Trump had asked his national security adviser, John Bolton, to invite Putin to Washington “in the fall,” and that the trip was already being discussed.

Ties between Moscow and Washington have been deteriorating since 2014, in the wake of the crisis in eastern Ukraine.

The relations became even more strained following the 2016 US presidential election, in which Russia was accused of meddling; Washington has slapped Moscow with numerous rounds of sanctions ever since.

Since 2017, the two sides have exchanged a series of tit-for-tat measures, further straining the fragile relations, including the expulsion of diplomatic staff and the closure of diplomatic missions.