TEHRAN, July 26 - A so-called monitor group said the death toll from a spate of attacks and bombings carried out by members of the Daesh Takfiri terrorist group in Syria’s southwestern province of Sweida has surpassed 220. 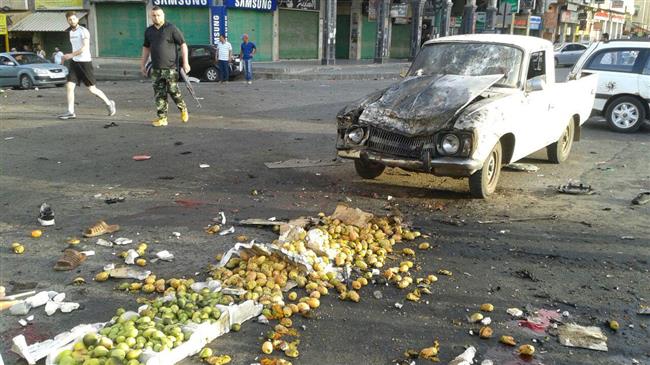 TEHRAN, Young Journalists Club (YJC) - The Britain-based Syrian Observatory for Human Rights said on Wednesday that three attackers set off their explosive belts in Sweida city, located more than 100 kilometers southeast of the capital Damascus, as other blasts hit villages to the north and east. A fourth bomb explosion hit the city later.

He added that bomb blasts and raids claimed the lives of 221 people, including 127 civilians.

The Observatory noted that the remaining 94 dead were local fighters from the pro-government popular defense groups, who had taken up arms to defend their villages against Daesh terrorists.

Abdel Rahman highlighted that the death toll is expected to further rise as some of the wounded victims are in critical condition and tens of people remain unaccounted for.

Daesh has claimed responsibility for the violence in a statement, saying "soldiers of the caliphate" attacked Syrian government positions and security outposts in Sweida, then detonated their booby-trapped belts.

The bloodiest death toll in Sweida since the start of the Syrian conflict came as Syrian government controls almost all of the province, but Daesh has control over pockets of land in its desert northern and eastern parts.

Syrian army troops are now closing in on foreign-sponsored Takfiri militants in the neighboring provinces of Dara'a and Quneitra.

On May 21, the General Command of the Syrian Army and Armed Forces announced in a statement that complete security was restored to Damascus and its countryside after al-Hajar al-Aswad district and al-Yarmouk camp were totally purged of Daesh terrorists.

The development was preceded by flushing the Takfiris out of the towns of Yalda, Babbila and Beit Sahem on the southern outskirts of Damascus.