Saudi student refuses to stand next to Israeli at Olympiad

A Saudi student who won an international chemistry tournament has made an interesting move by refusing to stand next to a representative of the Israeli regime. 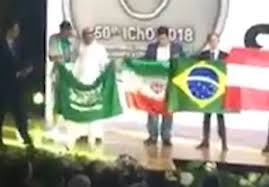 TEHRAN, Young Journalists Club (YJC) - Badr Salman al-Mulhim, who garnered a gold medal at the 50th International Chemistry Olympiad in Slovakia and the Czech Republic, chose to stand next to an Iranian flag-bearer, Arshia Khadem.

The Saudi student was a topic of social media discussions on Sunday after a widely shared video showed him changing his position when he realized the next person to him was going to be an Israeli student.

A large number of Arab activists flooded the social media to hail the Saudi student. A posting on Twitter said, “I admire that nice work, free people are found anywhere.”

Activists say the move shows that people of Saudi Arabia are against the Israeli occupation of Palestinian territories and oppose normalization of relations with Israel.

Saudi Arabia has been the main sponsor of the Arab Peace Initiative, which envisions the so-called two-state solution to the Israeli-Palestinian conflict.

The kingdom does not officially recognize Israel, but the two sides have widely been reported to have cooperated for years behind the scenes.

In April, a dissident Saudi prince revealed a series of “conditions” set by the United States and Israel for Crown Prince Mohammed bin Salman to secure their assistance in his ascending to the throne at home. Normalization of Riyadh’s ties with the regime in Tel Aviv was among the conditions.

In an interview with the Atlantic, Bin Salman attempted to put Israeli and Palestinian land claims on an equal footing in a dramatic shift in Riyadh’s long-held position on Palestine, saying Israelis, like Palestinians, have the “right” to have “their own homeland.”

Prior to bin Salman, no senior Saudi official had publicly acknowledged that Israel was entitled to any land ownership.

In recent months, the kingdom has been gradually softening its public posture toward Israel in what analysts describe as an attempt by Riyadh to prepare the public opinion at home and elsewhere for a potential normalization of relations with Israel.