TEHRAN, July 30-Israeli military forces have reportedly arrested four correspondents from a Palestinian television channel affiliated to the Islamic resistance movement, Hamas, as they carried out overnight search and detention operations across the occupied West Bank. 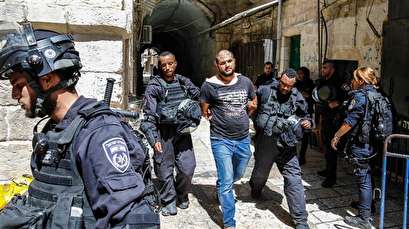 The Palestinian Prisoners' Society (PPS) said seven Palestinians, including four journalists of the Arabic-language al-Quds television network, were detained when Israeli forces broke into dozens of homes in the central West Bank city of Ramallah, located 10 kilometers (6 miles) north of Jerusalem al-Quds, in the early hours of Monday.

The Palestinian Journalists' Syndicate said two vehicles were seized in addition to equipment, including a television camera.

The Israeli military said in a statement that clashes broke out during the arrest raid, and soldiers “responded with riot dispersal means.”

Those arrested “were suspected of incitement and involvement in the Hamas-backed al-Quds television channel,” the statement added.

Earlier this month, the Israeli regime imposed bans on the broadcast of al-Quds TV, and said it cannot be put on air inside the occupied territories.

Israeli minister of military affairs Avigdor Lieberman said on Monday that the television network can operate neither in Jerusalem al-Quds nor in other parts of the Palestinian lands, and that the measure is in accordance with Israel’s so-called anti-terrorism law.

Israeli authorities have on occasions accused al-Quds television channel of being a “propaganda tool” for Hamas.

On August 31, 2017, dozens of Israeli soldiers raided the headquarters of Arabic-language al-Hurria radio station in the city of al-Khalil (Hebron) on alleged charges of “inciting violence and encouraging terrorism.”  Israeli forces also confiscated technical equipment during the raid.

The Union of Palestinian Journalists slammed the measure as an “awful and heinous crime which reflects the (Israelis’) barbaric, criminal, terrorist mentality towards Palestinian media.”