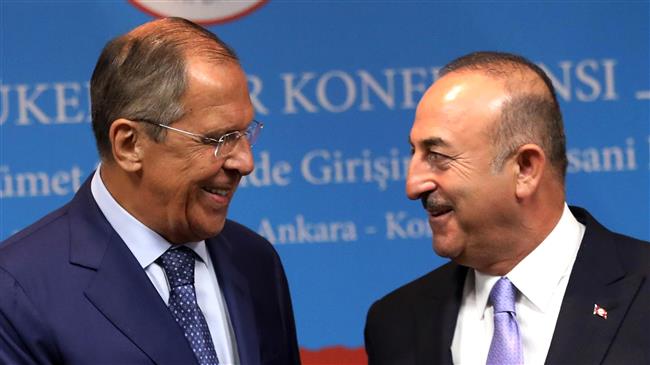 TEHRAN, Young Journalists Club (YJC) - Lavrov, who was speaking at a news conference with his Turkish counterpart in Ankara, said on Tuesday that the US dollar’s role as a global trade currency was in decline. “I’m confident that the grave abuse of the role of the US dollar as a global reserve currency will result over time in the weakening and demise of its role.”

The top Russian diplomat went on to say that Moscow favored bilateral trade with all countries in their national currencies, rather than in dollars.

“The use of national currencies for mutual trade has for several years been one of the tasks that the presidents of Russia and Turkey had set,” said Lavrov.

“Identical processes have been happening in our relations with Iran. Not only with Turkey and Iran, we’re also arranging and already implementing payments in national currencies with the People’s Republic of China,” he added.

The remarks come as the Kremlin has already backed a Turkish plan to dump the dollar and trade in national currencies.

On Saturday, Turkish President Tayyip Erdogan announced that Turkey was preparing to conduct trade through national currencies with China, Russia and Ukraine.

Asked about Erdogan's proposal, Kremlin spokesman Dmitry Peskov said on Monday that Russia had been pushing for such an arrangement with all countries. He said the issue had been raised on more than one occasion during bilateral talks.

Erdogan, who has described the Turkish lira's fall as the consequence of a plot, also said that recent US actions were a stab in the back against Ankara.

US President Donald Trump has gone on a sanctioning frenzy in recent months, targeting Iran, Turkey, and Russia, and creating what experts have dubbed an “axis of the sanctioned.”

Trump has recently ordered to double tariffs on Turkish aluminum and steel imports to 20 and 50 percent, respectively, saying, "Our relations with Turkey are not good at this time!”

The announcement on Friday came in protest over the detention of American Pastor Andrew Brunson, who was arrested on terrorism charges after the attempted coup against Erdogan in 2016.

The dispute between Washington and Ankara that reached new intensity over the detention of the pastor in Turkey has hammered the lira and also raised questions over the future partnership between the two NATO allies.

Erdogan advised Turks to show solidarity by converting any stashed-away gold or foreign currency to Turkish lira in a bid to wage a "war of independence" against the US.

The president has already warned that Turkey would “seek new friends” after the US “upset and annoyed” Ankara with sanctions.

Writing in the New York Times, Erdogan said, "Washington must give up the misguided notion that our relationship can be asymmetrical and come to terms with the fact that Turkey has alternatives.”