Germany: Hundreds gather in Chemnitz to protest against far-right violence 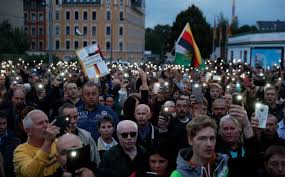 TEHRAN, Young Journalists Club (YJC) -More than 1,200 policemen kept watch over the rallies in the eastern city, where deep divisions over Merkel's 2015 decision to welcome a million refugees and asylum-seekers have flared up since the killing of the 35-year-old man six days ago.

Leftist protesters marched under the slogan 'Heart instead of Hate' in the center of Chemnitz, which was known as Karl-Marx-Stadt under Communist rule in East Germany as a homage to its industrial past. Dozens of leftist demonstrators gathered near a large bust of the father of Communism in the city center, where only a few days ago far-right demonstrators clashed with police.

Supporters of far-right groups, including PEGIDA and Alternative for Germany (AfD), also gathered to mourn the man who was stabbed to death.

Hundreds of far-right activists clashed with police and hounded refugees in the streets of Chemnitz last Sunday, August 26, after authorities said a Syrian and an Iraqi were detained as suspects in the fatal stabbing.

The influx of more than 1.6 million people seeking asylum in the last four years, mainly from Syria, Iraq and Afghanistan, has already changed Germany's social and political landscapes.