TEHRAN, September 04 -Anger smoldered in Brazil on Monday after a fire destroyed the National Museum, a cherished historical repository that lacked a sprinkler system and which had suffered years of financial neglect, making its destruction a “tragedy foretold.” 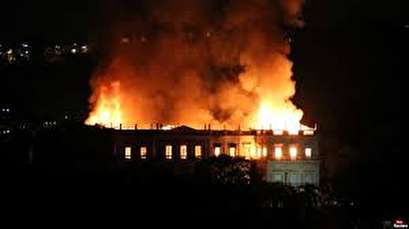 TEHRAN, Young Journalists Club (YJC) -Anger smoldered in Brazil on Monday after a fire destroyed the National Museum, a cherished historical repository that lacked a sprinkler system and which had suffered years of financial neglect, making its destruction a “tragedy foretold.”

Outside the entrance to the elegant park housing the 200-year-old former Imperial Palace, police in riot gear shot tear gas into a small, angry crowd that tried to enter, live TV images showed. Later, police granted access to the site’s perimeter, which protesters surrounded in a symbolic “embrace.”

The rumbling tensions reflect anger over the destruction on Sunday of the much-loved yet dilapidated museum, which suffered from declining federal funding. It stirred emotions in Brazil, whose angry electorate is reeling from a frail economy, widespread graft and rising violence ahead of an unpredictable presidential election in October.

“Our community is very mobilized, and very indignant,” said Roberto Leher, rector of the Rio de Janeiro federal university, which administers the museum. “We all knew the building was vulnerable.”

Brazil’s culture minister Sergio Leitao told the Estado de S.Paulo newspaper the blaze was likely caused by either an electrical short-circuit or a homemade paper hot-air balloon that may have landed on the roof. Launching such balloons is a long-held tradition in Brazil and they routinely cause fires.

Both possibilities were being considered, Culture Ministry spokeswoman Roberta de Oliveira Ribeiro said in an email, but the cause would not be known until an investigation was completed. The Rio de Janeiro federal university did not immediately respond to a question on whether the museum was insured.The museum’s pastel-yellow facade remained standing after the blaze, but a peek inside its giant windows revealed a roofless interior of blackened hallways and charred beams. Every so often, firemen emerged with a pot or a painting they had managed to rescue.

The Rio fire department’s commander, Roberto Robadey, said the hydrants outside the building were dry when firefighters arrived, forcing them to turn to a nearby lake and tanker trucks for water.

“Yesterday was one of the saddest days of my career,” he said.

The museum is not the first to burn down in Brazil, where public money for cultural projects has been drying up after a deep recession. In 2015, for example, a blaze destroyed the prestigious Museum of the Portuguese Language in Sao Paulo.