British people would now vote 59-41 to stay in EU: Poll

TEHRAN, September 05 -A new opinion poll has shown that support for EU membership has reached a record high in Britain, with nearly 60 percent of voters saying they would now vote to stay in the European Union. 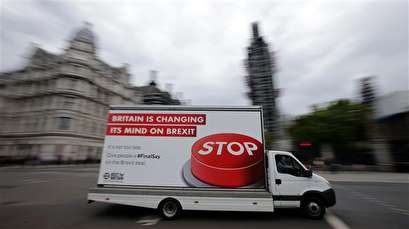 TEHRAN, Young Journalists Club (YJC) -A new opinion poll has shown that support for EU membership has reached a record high in Britain, with nearly 60 percent of voters saying they would now vote to stay in the European Union.

Polling by research bodies NatCen and The UK in a Changing Europe has found that 59 percent of voters would now vote to remain in the EU, versus 41 percent who would vote to leave.

That is the highest recorded support for “Remain” in a number of surveys conducted since the Brexit referendum and a large reversal of the actual 52-48 percent vote to leave.

Polling expert John Curtice, who authored the report, said their panel of interviewees reported they had voted 53 percent in favor of Remain in original Brexit vote - a higher percentage than the actual vote.

“Nevertheless, this still means that there has apparently been a six-point swing from Leave to Remain, larger than that registered by any of our previous rounds of interviewing, and a figure that would seemingly point to a 54 percent (Remain) vote in any second referendum held now,” Curtice said in the report.

Another new survey showed that more than 2.6 million voters now regret their initial support for Brexit and now back remaining in the EU.

About 970,000 people have switched their support from Remain to Leave, meaning that a net total of 1.6 million more voters now support being part of the bloc, according to the poll carried out by YouGov for the pro-EU group Best for Britain.

The UK and the EU have less than two months to reach a deal to end over 40 years of union. Prime Minister Theresa May is having a hard time selling what she describes as her business-friendly Brexit to her own party and a divided country.

Many backbench Labour and Conservative lawmakers have voiced their support for a fresh referendum on EU membership in recent months. But Prime Minister May says that such a move would be "a gross betrayal of our democracy."

The premier has insisted she would not revise her strategy, which contains proposals for free trade between Britain and the EU in manufactured and agricultural goods. The government says accepting regulations over traded goods that align with EU rules would be the only way to achieve Brexit without harming the economy.

There is an increasing uncertainty on whether the UK could secure an agreement with the EU on its future relations with the bloc or it would simply crash out in March next year without determining how trade and other issues will be regulated.