Mattis to visit Macedonia amid concerns of Russia meddling

TEHRAN, September 12 - US Defense Secretary Jim Mattis announced plans Tuesday to visit Macedonia, ahead of a referendum that could end a years-long spat with Greece over the country's name and pave the way for it to join NATO. 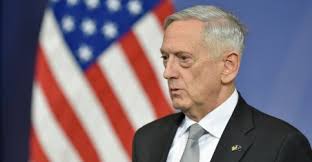 TEHRAN, Young Journalists Club (YJC) - The Pentagon chief said he was concerned Russia might be attempting to interfere in the outcome of the election, which if successful could also eventually see Macedonia join the EU.

"Democracies should be left alone," Mattis told reporters at the Pentagon.

"If their ambassador wants to make a statement in the paper, that's one thing. But the kind of mischief that Russia has practiced from Estonia to the United States, from Ukraine and now to Macedonia, it always is adapted to the specific situation and it's always beyond the pale, as far as I'm concerned."

He added: "I'm going there to make very clear we stand with the Macedonian people."

Mattis's trip to Macedonia next weekend comes after NATO in July formally invited the Balkan nation to join the Western defense alliance.

Macedonia's parliament has set September 30 as the date for a referendum on changing the former Yugoslav republic's name to the Republic of North Macedonia.

Skopje and Athens signed a landmark agreement in June to rename Macedonia in an effort to break a stalemate that has poisoned their relations since 1991 and hobbled Macedonia's integration with the West.

Greece has objected to its neighbor being called Macedonia because it has a northern province of the same name, accusing Skopje of territorial ambitions and appropriating its cultural heritage.