TEHRAN, September 13 - The Israeli military has reportedly sent reinforcements to Khan al-Ahmar as the regime prepares to demolish the Palestinian Bedouin village in the occupied West Bank in defiance of international warnings and criticisms. 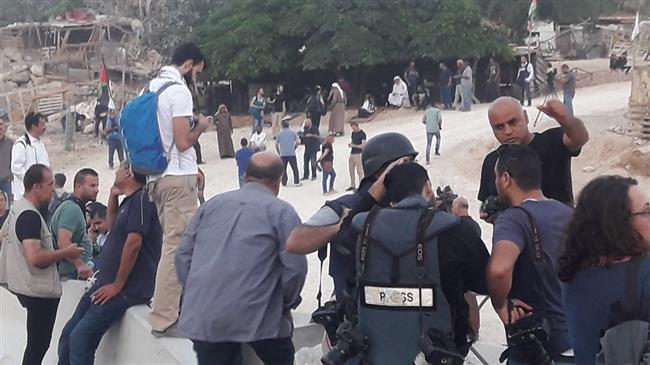 Last week, Israel’s Supreme Court rejected appeals against the demolition of Khan al-Ahmar and said a temporary injunction that had put the move on hold would expire within seven days.

The Tel Aviv regime says the village is built illegally, but Palestinians say the demolition plan is part of the regime’s forcible displacement policy to make room for its settlement construction activities on occupied land.

The United Nations urged Israel not to demolish the village, home to 180 Palestinians, adding that the planned move violates international law.

Saeb Erekat, Secretary General of the Palestine Liberation Organization (PLO), said on Tuesday that he had filed a complaint against Israel with The Hague-based International Criminal Court (ICC).

The dossier submitted “included a focus on the war crimes facing Khan al-Ahmar, specifically the crimes of forcible displacement, ethnic cleansing and the destruction of civilian property,” Erekat said.

However, US National Security Adviser John Bolton attacked the ICC, threatening to sanction judges and other officials should the court conduct any probe into Israel or other US allies.

It also stressed that the demolition plan is part of the regime’s attempts “to try to legalize the crimes of the Israeli occupation and its policies which are based on the forcible settlement and ethnic cleansing of Palestinian residents of their land and property.”

The PA further called on Palestinians to come to the streets of Khan al-Ahmar to protest any attempt to demolish the village.

Responding to that call, dozens of protesters marched in the village carrying Palestinian flags.

Esam Abu Baker, coordinator of the Palestinian National and Islamic Forces in Ramallah, who took part in the protest, expressed confidence that the demonstrators “are staying on the land of our ancestors and we will not leave this place.”

Khan al-Ahmar is located eight kilometers from Jerusalem al-Quds between the Israeli settlements of Ma’ale Adumim and Kfar Adumim, which Tel Aviv wants to expand.

About 600,000 Israelis live in over 230 settlements built illegally since the 1967 occupation of the Palestinian lands.

Emboldened by US President Donald Trump’s all-out support, Israel has in recent months stepped up its settlement construction activities in the occupied territories in defiance of United Nations Security Council Resolution 2334.

The resolution, approved in December 2016, states that Israel’s establishment of “settlements in the Palestinian territory occupied since 1967, including East Jerusalem, has no legal validity and constitutes a flagrant violation under international law and a major obstacle to the achievement of the two-state solution and a just, lasting and comprehensive peace.”