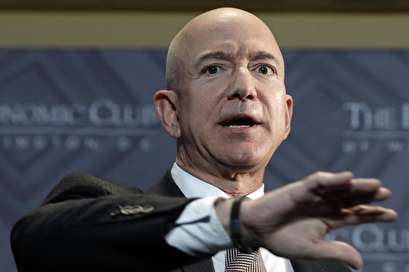 Jeff Bezos said the new Day One Fund was inspired by his "Day 1 mentality."

"It's always Day 1, and I work hard to apply that mindset to everything I do," he said in the announcement on Twitter. "It was a Day 1 outlook that made me reach out to ask for suggestions on approaches to philanthropy last year."

The fund will be split into two efforts -- the Day 1 Families Fund and the Day 1 Academies Fund. The former will "issue annual leadership awards to organizations and civic groups doing compassionate, needle-moving work to provide shelter and hunger support to address the immediate needs of young families."

The Day 1 Academies Fund will establish full-scholarship Montessori-like preschools where "the child will be the customer."

"We will build an organization to directly operate these preschools," Bezos said. "I'm excited about that because it will give us the opportunity to learn, invent and improve."

The Bloomberg Billionaires Index names Bezos as the world's richest person, with a total net worth of about $164 billion. But his company's treatment of employees has come under scrutiny in recent years.

The Stop BEZOS Act is an unsubtle reference to Bezos, whose company has been criticized for not paying many employees a living wage while also using independent contractors for its delivery services.