Tehran, YJC. Having seen what teams the Iranian national team will have to play against at the World Cup 2014, let us have a look at the team's record so far

In 1978, Iran made its first appearance in the World Cup after defeating Australia in Tehran to qualify. Iran lost two of their three group stage games against theNetherlands and Peru. However, they managed to create a surprise by drawing 1–1 against Scotland with a goal from Iraj Danaeifard.

In November 1997, Iran qualified for the 1998 World Cup after eliminating Australia in a close playoff series. Both games finished undecided, but Iran managed to qualify due to the away goals rule. Iran held Australia to a 1–1 draw at home, and a 2–2 draw in Melbourne; however, since Iran had scored more away goals, they were able to qualify for the Cup. 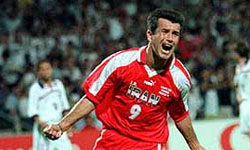 At their first game of the Group F at the 1998 FIFA World Cup, Iran played well against Yugoslavia, losing narrowly 1–0, only to a free kick goal by Mihajlović. Iran recorded their first World Cup victory in the second game, beating the United States 2–1, with Estili and Mahdavikia scoring goals for Iran. The Iran vs USA World Cup match was preheated with much excitement because of each country's political stance after the Iranian revolution. However, in an act of defiance against all forms of hatred or politics in sports, both sides presented one another with gifts and flowers and took ceremonial pictures before the match kickoff. Following defeat with Iran the United States were eliminated from the World Cup.

Iran played against Germany in the third game. The game was lost 2–0. The goals were scored by Bierhoff and Klinsmann. The one win and two losses meant Iran became third in the final group standing and failed to make it to the next round.

Iran started their 2006 FIFA World Cup appearance with high expectations from fans and media. Their first match was against Mexico in Group D. The game was level 1–1 at the half-time, but Iran lost at the end because of a defensive mistake. The final score, 3–1, was brought about by goals from Omar Bravo and Zinha for Mexico, with Yahya Golmohammadi scoring the only Iran goal.

Iran played against Portugal in the second game. The game was lost 2–0. The goals were scored by Deco and Cristiano Ronaldo (penalty). The two losses meant Iran was eliminated from the competition, before their third and final game against Angola. Iran drew 1–1 with Angola on the 21st of June 2006, Sohrab Bakhtiarizadeh scoring the Iran goal. 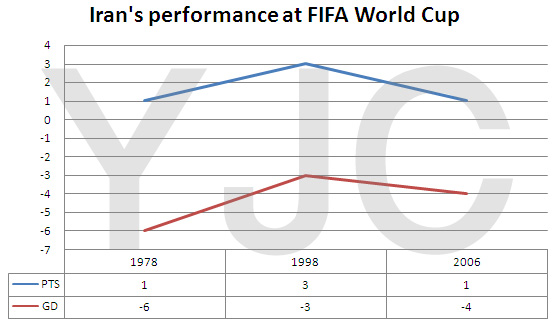