TEHRAN, September 23 - A referendum in Switzerland's northeastern region of St. Gallen has introduced a "burqa ban" that would prohibit Muslim women from wearing garments covering the entire face in public. 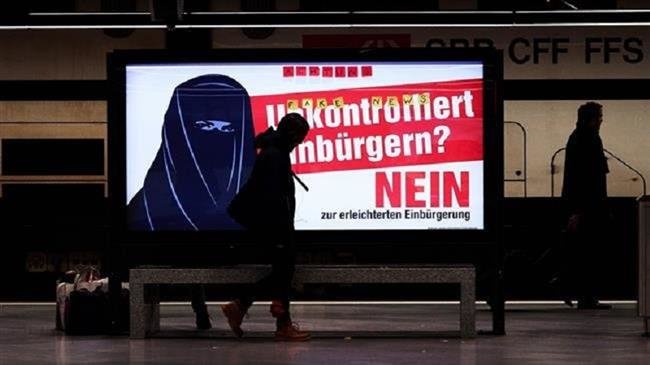 TEHRAN, Young Journalists Club (YJC) - Voters in St. Gallen on Sunday approved by a two-third majority the ban on Islamic veils such as niqab or burqa.

According to official results, nearly 67 percent of voters were in favor of the new controversial law.

The regional government now has to implement the result of the vote, which drew a turnout of around 36 percent.

A text stipulating that "any person who renders themselves unrecognizable by covering their face in a public space, and thus endangers public security or social and religious peace will be fined" was adopted by legislators in St. Gallen late last year.

The law passed the regional parliament with support from populist parties. The issue was put to the people after the Green Party and Young Socialists demanded a referendum.

Reacting to the Sunday vote, Switzerland’s largest Islamic organization, the Islamic Central Council, recommended that women continue to cover their faces. It said it would closely monitor the implementation of the ban and consider legal action if necessary.

The Swiss federal government in June opposed a grassroots campaign for a nationwide ban on facial coverings, saying it should be up to the regions to determine if such measures are appropriate.

Voters across Switzerland are, however, expected to be called to vote on the issue next year after the populist right wing Swiss People's Party gathered the 100,000 signatures needed to put any subject to a referendum as part of Switzerland's famous direct democratic system.

The supporters of the ban cite “security” concerns about the full-face covering. Opponents, however, say that national legislators should try to stay out of “the clothing closet.”

In 2009, Switzerland approved a ban on the construction of minarets at mosques.

Several European countries have also adopted restrictions on the Islamic symbols and clothing since 2000. France became the first European Union country to ban the public wearing of burqa in April 2011. A law took effect in Belgium in July that year that banned any clothing that obscured the identity of the wearer in public.

In the Netherlands, a proposed law banning burqas is awaiting approval by the senate. It was approved by the lower house of the Dutch parliament in November 2016.