TEHRAN, September 26 - Scientists aren't sure how a fish this brightly colored went undiscovered for so long. But it did. 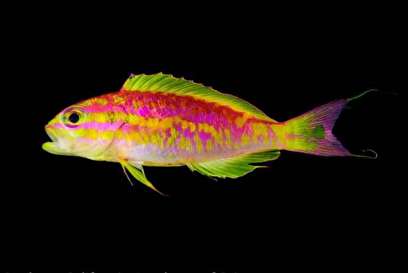 TEHRAN, Young Journalists Club (YJC) -Perhaps it is the species' remote home in the middle of the equatorial Atlantic that made the fish so elusive. But once scientists spotted the bright pink, yellow and green fish, they couldn't look away.

"This is one of the most beautiful fishes I've ever seen," Luiz Rocha, curator of fishes at the California Academy of Sciences, said in a news release. "It was so enchanting it made us ignore everything around it."

Genetic analysis confirmed the species belonged to the Tosanoides genus, which until now, scientists thought was unique to the Pacific.

Scientists named the new species after Aphrodite, the Greek goddess love and beauty. The Greek gods were said be regularly transfixed by the Aphrodite's good looks.

Though the Brazilian fish's bright colors aren't apparent to all. The species was found at depths of nearly 400 feet. In the twilight zone, there is very little red light.

"Fishes from the twilight zone tend to be pink or reddish in color," said post-doctoral fellow Hudson Pinheiro. "Red light doesn't penetrate to these dark depths, rendering the fishes invisible unless illuminated by a light like the one we carry while diving."

Scientists believe the fish is just one of many undiscovered species living among the darkness of twilight zone's coral reefs.

Just like other reefs, the twilight zone's corals and the food chains they anchor are vulnerable to climate change.

"In a time of global crisis for coral reefs, learning more about unexplored reef habitats and their colorful residents is critical to our understanding of how to protect them," said Rocha. "We aim to highlight the ocean's vast and unexplored wonders and inspire a new generation of sustainability champions."