Tehran, YJC. Suprme Leader has said his notion of cultural onslaught pointed out years ago has found resonance in Europe.

In a meeting with members of the Cultural Revolution Supreme Council on Tuesday, Ayatollah Khamenei said "Undeniable examples are starting to spring up in the words of cultural and political figures from here and there, including Europe, on the American cultural onslaught which I mentioned years ago.”

The Supreme Leader stated that some imported toys and TV games are examples of such onslaught, initiating young minds to the Western lifestyle.

Necessitating attempts to identify new ways and means of cultural onslaught before they find a way into Iran, Khamenei maintained "Delayed recognition and action will cause problems. So action must be taken timely and wisely.” 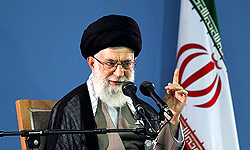 "Some phenomena have to be completely warded off, while some others can be accepted or amended."

Ayatollah Khamenei asserted that the worst approach to the cultural onslaught is to adopt a passive, defensive position against the offensive culture and said "Offensive measures are also occasionally needed. However the case, one has to act wisely and thoughtfully.”

Leader warned that imported video games and toys are promoting Western lifestyle in Iran. "The cultural invasion must be dealt with through creative efforts and, to that effect, the Islamic Republic of Iran Broadcasting and Ministry of Culture and Islamic Guidance shoulder very heavy responsibility,” Ayatollah Khamenei asserted.

The Leader urged the Ministry of Culture and Islamic Guidance to focus on producing books and attractive films, designing useful video games and developing attractive and meaningful toys.
Ayatollah Khamenei stated that video games and toys imported from abroad are affecting Iranian youth, juniors and children through promotion of Western lifestyle and behavior.
The Leader said at least "hundreds” of media outlets across the world are specifically seeking to "influence the mindset and behavior of the Iranian nation.”
Share to
Tags
supreme ، leader ، cultural ، onslaught
Your Comment