TEHRAN, October 02 -"The information contained in this study can help managers make decisions if carbon storage is a function they want to enhance," ecologists Grace Cott said. 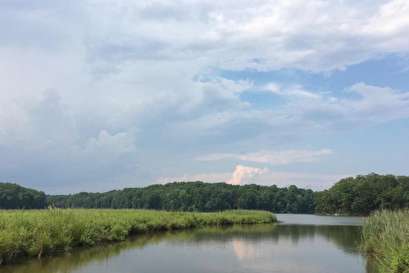 TEHRAN, Young Journalists Club (YJC) -"The information contained in this study can help managers make decisions if carbon storage is a function they want to enhance," ecologists Grace Cott said.

But new research suggests invasive plants could aid the fight against climate change in some ecosystems. Scientists found invasive plants can boost the uptake of "blue carbon," carbon found in coastal ecosystems like salt marshes, mangroves and seagrasses.

"We were aware of the effects of invasions on other facets of these habitats, but this was the first time we really delved into blue carbon storage," Ian Davidson, a marine invasions biologist at the Smithsonian Environmental Research Center, said in a news release.

Until recently, climate scientists focused on the the role forests play in carbon absorption and storage, but a growing body of research has highlighted the impressive carbon-storing abilities of marshes and mangroves.

These water-logged ecosystems can store carbon 40 times faster than forests. But like forests, blue carbon ecosystems have been on the retreat for several decades.

To better understand how blue carbon ecosystems are impacted by invasive species, scientists conducted a survey of scientific literature on the subject. Using data from 104 different studies, researchers compared observations of blue carbon habitats with and without the presence of invaders.

Their analysis -- published this week in the journal Global Change Biology -- showed the presence of invasive plant characterized as "ecosystem engineers" boosted the habitat's biomass and potential for carbon storage.

"When you have these essentially 'ecosystem engineers' come into the system, not only are they helping build habitat, they seem to be doing it more aggressively and more efficiently," Davidson said.

Invasive animals have the opposite effect.

The study's authors aren't endorsing the introduction of ecosystem engineers into blue carbon ecosystems. So far, scientists have only measured the impact of invasive plants on an ecosystem's biomass. It's likely invasive plants have significant impacts on plant and animal diversity that could imperil the long-term stability of a marsh or mangrove.

However, the findings could help inform management decisions in ecosystems already impacted by invasive plants.

"Ecosystem managers will be faced with a decision to eradicate or control invasive species," said Grace Cott, a wetland ecologist at University College Cork in Ireland. "The information contained in this study can help managers make decisions if carbon storage is a function they want to enhance."