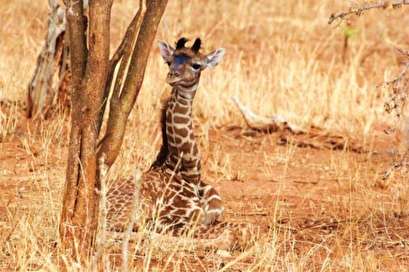 The spot patterns of giraffes are at least partially inherited from their moms. According to a new study, spot patterns are linked with juvenile survival rates.

"Giraffe spot patterns are complex and can be quite different among individuals, but we don't really know their purpose in the wild," Derek E. Lee, associate research professor at Penn State University, said in a news release. "Complex markings can help animals evade predators, regulate their temperature, or recognize family or individuals, all of which can affect their ability to survive and reproduce. In this study, we analyzed survival records and photos of spots of Masai giraffes, and show that spot patterns do affect juvenile survival and are heritable -- they are passed from mom to baby."

Because a giraffe's spots are unique and static -- they don't change as the giraffe grows -- researchers can use spot patterns to track individuals.

In their new paper on the subject, published this week in the journal PeerJ, researchers hypothesized larger and irregular spots enhance a newborn's camouflage, helping them avoid predators.

Lee and his colleagues also acknowledged that larger spots and irregularly shaped spots could help newborns better regulate temperature -- or possibly help young giraffes be easily identified by their moms.

Additionally, researchers found a newborn's spot patterns and their benefits are inherited from mom. Researchers used statistical models to measure and analyze the circularity and solidity of spots on mom and baby, revealing a statistically significant correlation.

"Dr. Anne Innis Dagg, the first giraffe field researcher in Africa, presented evidence in 1968 that the shape, number, area, and color of spots in giraffe coat patterns may be heritable, but her analysis came from a small zoo population," said Monica Bond, grad student in evolutionary biology and environmental studies at the University of Zurich. "We used wild giraffes and modern imaging and analysis techniques to confirm her conclusions."