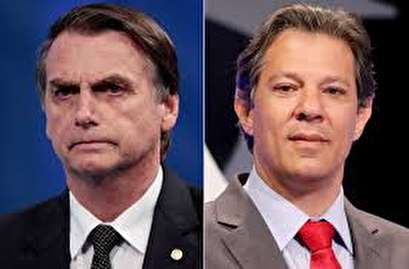 In a simulated second-round vote, the poll found Bolsonaro would get 44 percent support, beating Haddad’s 42 percent, within the margin of error of the survey. The remaining 14 percent of voters are undecided or plan a blank or spoiled ballot for the vote, which is compulsory.

If no candidate wins a majority in the first round on Sunday, the election will be decided in a second-round run-off on Oct. 28 between the two top vote-getters.

In the first-round scenario, Datafolha found that Bolsonaro had 32 percent voter approval, four percentage points higher than the previous Datafolha poll on Sept 28. Haddad dropped one point to 21 percent.

That raises the possibility of Bolsonaro rapidly gaining steam ahead of Sunday’s vote - and possibly winning the election outright by taking a majority of the ballots.

In 2014, about a quarter of the electorate did not decide on a candidate until the final days ahead of the vote.

The number of voters who say they would never cast their ballot for Bolsonaro, a former army captain who has angered many with misogynist and racist remarks, has continued to rise, reaching 45 percent of those polled by Datafolha.

But in a sign of how increasingly polarized the election has become, the rejection rate for Haddad is at 42 percent, almost doubling since the previous poll four days ago.

Datafolha surveyed 3,240 voters across Brazil on Monday and Tuesday. The poll’s margin of error is 2 percentage points.