TEHRAN, October 04 -Iraq’s Foreign Ministry has dismissed accusations by the United States that Iran is to blame for recent violence — including through alleged militant groups — in the southern Iraqi city of Basra, where Washington recently closed its consulate. 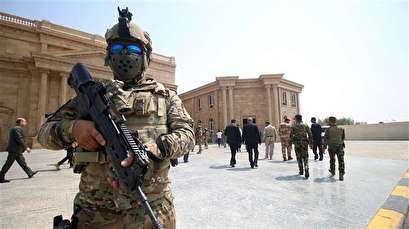 TEHRAN, Young Journalists Club (YJC) -Iraq’s Foreign Ministry has dismissed accusations by the United States that Iran is to blame for recent violence — including through alleged militant groups — in the southern Iraqi city of Basra, where Washington recently closed its consulate.

“There are no forces or military groups in Iraq that receive orders from abroad, whether from Iran or from another country,” said Iraq’s Foreign Ministry spokesman Ahmad Mahjoub in Washington on Wednesday, according The Washington Times.

He was speaking during a round-table discussion with reporters held at the Iraqi Embassy in the US capital, where he is on a trip to hold talks with US officials.

Mahjoub said Iraqi authorities were “surprised” by Washington’s recent decision to withdraw American personnel from the US consulate in Basra following an apparent rocket attack at the diplomatic perimeter.

“We were surprised that our American friends withdrew their staff from the US consulate.” He said, adding that Baghdad was “committed to protecting all foreign missions in Basra.”

Earlier, on Friday, US Secretary of State Mike Pompeo had blamed Iran for the violence in Basra and the emergency evacuation of US personnel from there, as well as for alleged security threats to the Americans stationed at the US Embassy in Baghdad.

“The United States will hold Iran directly responsible for any harm to Americans or to our diplomatic facilities in Iraq or elsewhere and whether perpetrated by Iranian forces directly or by associated proxy militias,” he said.

Mahjoub, the Iraqi Foreign Ministry spokesman, implied that Pompeo was getting his information from unreliable sources.

“I’m not aware of the source of the information that Secretary Pompeo has regarding the Iranian role in the threats against the US consulate in Basrah,” he said. “We also regret that the Iranian Consulate was attacked during these demonstrations.”

He was referring to an attack on the Iranian diplomatic mission in the city last month.

Mahjoub said “it’s good” that the Iranian Consulate was now “back to work” in the city.

Meanwhile, US Army Col. Sean Ryan, the spokesman for the US-led military coalition to purportedly battle Daesh in Iraq, seemed to discount Pompeo’s allegation against Iran.

“It (the attack) may have been the work of local protesters, angered over the lack of much-needed government services and rampant corruption among the city’s leaders, rather than an organized paramilitary force,” he told reporters on Tuesday, also according to The Washington Times.

Col. Ryan further said that American forces with the US Central Command, as well as those tied to the coalition, were planning to assist in the evacuation of US personnel from Basra.

Iran has already dismissed any role in the violence in Basra, stressing that it has been a victim of that violence itself.

“Iran was in fact the victim of activities by violent and mercenary groups, which took orders from their enablers hostile to Iran, for the attack on the Iranian Consulate [in Basra],” Iranian Foreign Ministry Spokesman Bahram Qassemi said on Monday.

Mahjoub said the Iraqi government had sent in security forces to ensure security in Basra.