TEHRAN, October 04 - Thousands of people took to the streets of the southern Russian region of Ingushetia on Thursday to protest against what they said was an unfair land swap deal with the neighboring Russian region of Chechnya. 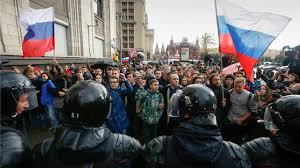 TEHRAN, Young Journalists Club (YJC) - Social media footage of the protest in Magas, the regional capital, showed several thousand people in the vicinity of the regional parliament, accompanied by the sound of security forces firing into the air to try to disperse the crowd.

The regional parliament on Thursday endorsed the new border deal agreed by the heads of Ingushetia and Chechnya, both majority Muslim regions, on Sept. 26.

The deal envisages a land swap meant to end simmering territorial tensions that emerged after the 1991 fall of the Soviet Union.

Protesters in Ingushetia said they believed that the deal amounted to a surrender of territory and that the arrangement favored Chechnya at their own region's expense.

Artyom Perekhrist, an adviser to Yunus-Bek Yevkurov, the head of Ingushetia, told Reuters that up to 10 of the protesters had accepted an invitation to discuss their concerns with the authorities and that the demonstration was thinning out.

Separately, Yevkurov called for calm in a statement, saying the land swap deal was a good one.