TEHRAN, October 04 - Mourners attend the funeral in Beit Lahia of Ahmed Abu Habel, a Palestinian teenager who succumbed to a head wound after being hit with a teargas canister fired by Israeli soldiers. 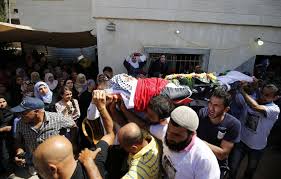 TEHRAN, Young Journalists Club (YJC) - The teenager was injured near the Erez checkpoint between the Israeli-occupied territories and the Gaza Strip, the health ministry in the enclave said.

Israel's military did not comment on the specific incident but a spokeswoman told AFP that soldiers had "fired live rounds in accordance with the rules of engagement" as protesters massed along the border.