TEHRAN, October 06 - Tokyo fishmongers gathered before dawn Saturday for one final tuna auction at the world-famous Tsukiji market before it closed its doors to move to a new site. 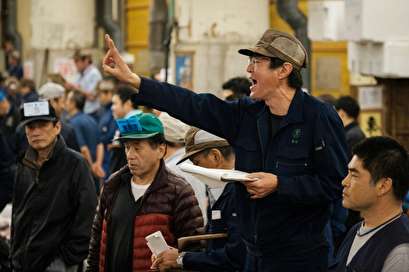 TEHRAN, Young Journalists Club (YJC) -Tokyo fishmongers gathered before dawn Saturday for one final tuna auction at the world-famous Tsukiji market before it closed its doors to move to a new site.

It was an emotional moment for veterans of the market, the beating heart of Tokyo's culinary scene for decades, which many acknowledged had become too rundown to support its mammoth operations.

"I'm almost crying," said Hisao Ishii, a retired seafood auctioneer who was back at the market for its final day.

"Today is a sad day of goodbyes. Tsukiji tried to meet the times, but it is getting older," the 68-year-old told AFP. "I came here today to tell Tsukiji thank you and goodbye."

In the weak early-morning sun, traders filed into a warehouse for the last tuna auction, an indispensable ritual in Tokyo's culinary world, and a major tourist draw.

Hundreds of fresh and frozen tuna tagged with their weight and port of origin were laid out in lines in a refrigerated warehouse, as buyers in rubber boots quietly inspected the wares.

They rubbed slices between their fingers and shone torches into the insides of the fish, swapping information with rivals before the showdown began.

At 6:00 am sharp, handbells rang to signal the auction was under way and the air filled with the sound of auctioneers yelling prices at buyers, who raised fingers to indicate interest.

The highest bidder at Saturday's auction paid 4.4 million yen ($38,700) for a bluefin tuna -- a threatened species -- weighing 162 kilograms (357 pounds) caught off Aomori, northern Japan, according to the market.

It was far below the record 155.4 million yen paid at the first auction of 2013. Buyers traditionally offer eye-watering prices as a "New Year gratuity" when the market resumes operation after winter holidays.

Fish wholesaler Takeshi Yoshida said Tsukiji had left "its mark on history" but it was time to "pass the baton".

Tsukiji's inner market, known as "Japan's Kitchen", will now move to Toyosu, a site in eastern Tokyo, where operations will begin on October 11.