TEHRAN, October 06 -US researchers say they have observed continued activity at a nuclear facility in North Korea which is accusing Washington of not implementing pledges made at a June summit of their leaders. 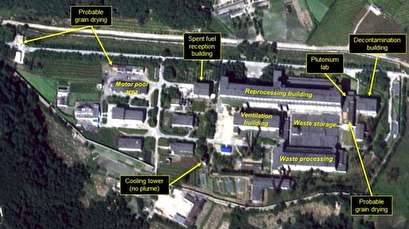 TEHRAN, Young Journalists Club (YJC)-US researchers say they have observed continued activity at a nuclear facility in North Korea which is accusing Washington of not implementing pledges made at a June summit of their leaders.

The photos, they said, also showed an ongoing dredging of a river near a pump house, which draws cooling water for the site’s reactor.

The group said the photos, taken on September 24, showed minimal movements of vehicles and equipment in the area, but the purpose of their activity was unknown.

The researchers, however, said they believed the reactor at Yongbyon was not operating as there was no steam coming from the generator hall.

They also said “no significant changes” had been observed in the fissile material production in Yongbyon in comparison with previous reports.

The permanent closure of Yongbyon is viewed as the first substantive step towards the denuclearization of the Korean Peninsula.

The American and North Korean leaders held their first meeting in Singapore in June, reaching a vague denuclearization agreement. However, talks between the two sides have had little progress since then.

In a move to resolve the impasse, South Korean President Moon Jae-in visited the North last month and met with its leader Kim Jong-un who offered to shut down the Yongbyon nuclear complex if Washington takes "corresponding measures.”

Pyongyang says Washington has betrayed the spirit of the June’s summit by making unilateral demands on the complete, verifiable and irreversible denuclearization, while putting the sanctions in place.

North Korean authorities have complained about continued US and international sanctions on their country, calling them a “source of mistrust.” They have also denounced what they have called "gangster-like behavior" by the US.

The UN Security Council has unanimously imposed several rounds of tough sanctions on North Korea since 2006 in an attempt to choke off funding for Pyongyang’s nuclear and ballistic missile programs.

North Korea stresses that denuclearization will have to be phased, with each stage coming in return for reciprocal steps by the US, potentially including the removal of US forces from the South Korea and lifting rounds of sanctions one by one.

Pyongyang has firmly defended its military program as a deterrent against the hostile policies of the US and its regional allies, including South Korea and Japan.