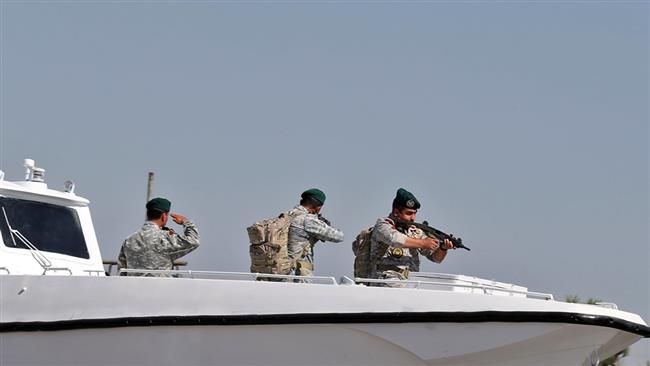 TEHRAN, Young Journalists Club (YJC) - The parade was conducted on the day of the Islamic Revolutionary Guard Corps Navy (IRGCN), with the aim of controlling and safeguarding the security of the international waterway.

According to Iran Press, commander of the IRGC Navy's Fourth Zone Admiral Mansour Ravankar stressed that the parade was aimed at displaying the preparedness of various units of the IRGC Navy in defending the country’s marine borders in the Persian Gulf.

The senior IRGC commander also noted that more than 110 rocket-launching speedboats, long-, mid- and short-range missile launchers, mining vessels as well as reconnaissance, defensive and logistic vessels took part in the parade to show off their readiness to counter any possible aggression against the country.

In relevant remarks in August, the Islamic Revolution Guards Corps (IRGC) Commander Major General Mohammad Ali Jafari highlighted the IRGC Navy’s deterrent power in international waters and said the enemy avoids any conflict with the forces because it knows that it would be to its detriment.

The commander further described the employment of faithful and revolutionary individuals as a vital factor behind the IRGC Navy’s power and said, “It is natural that the enemy strictly avoids any conflict because it knows that it would end to its detriment.”

The first stage of the drills, dubbed Muharram, kicked off six days ago with the presence of 70 percent of the IRGC Ground Force’s Hamzeh Seyed al-Shohada Base forces.

The air forces of Iran's Army and Islamic Revolution Guards Corps (IRGC) held joint aerials drills in the Persian Gulf and the Sea of Oman on September.

Iran also launched a naval exercise in the Persian Gulf on August, on the back of renewed tensions between Iran and the US

US officials said the drills appeared designed to send a message to Washington, which is intensifying its economic and diplomatic pressure on Tehran after withdrawing from a landmark nuclear deal in May.

On May 8, US President Donald Trump pulled the US out of the The Joint Comprehensive Plan of Action (JCPOA) reached between Tehran and the world powers in 2015.

Washington has since told countries they must stop buying the OPEC producer's oil from November 4 or face financial consequences.

Speaking at the Iranian parliament on Sunday, Iranian foreign minister Mohammad Javad Zarif emphasized that US sanctions against Iran will definitely be defeated.

He said, "The extent of America's isolation became clear over the past two weeks in New York, at the UN general assembly meeting. US president, Donald Trump could not bring onboard any country in his campaign against Iran at the UN security council."