Chill in the air as Pompeo meets Chinese counterparts in Beijing

TEHRAN, October 08 -U.S. Secretary of State Mike Pompeo and Chinese Foreign Minister and State Councillor Wang Yi aired their grievances in the open on Monday during a brief visit to Beijing by Washington’s top diplomat, amid worsening relations. 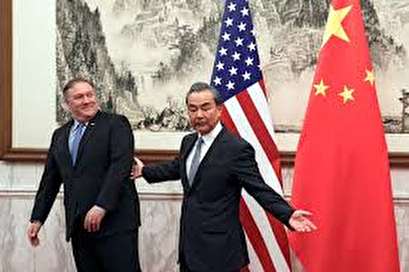 While the exchange included typical diplomatic pleasantries, and the two officials emphasized the need for cooperation, their remarks before journalists at the start of their meeting at Beijing’s Diaoyutai State Guest House were unusually pointed.

“Recently, as the U.S. side has been constantly escalating trade friction toward China, it has also adopted a series of actions on the Taiwan issue that harm China’s rights and interests, and has made groundless criticism of China’s domestic and foreign policies,” Wang said at a joint appearance with Pompeo.

“We believe this has been a direct attack on our mutual trust, and has cast a shadow on China-U.S. relations,” he added. “We demand that the U.S. side stop this kind of mistaken action.”

Wang also urged the United States to stop selling arms to Taiwan and to cut off official visits and military ties with the self-ruled island Beijing claims as its own, according to a Chinese Foreign Ministry statement.

Pompeo, who was briefing Wang following his visit with North Korean leader Kim Jong Un, said, “The issues that you characterized, we have a fundamental disagreement.

“We have great concerns about the actions that China has taken, and I look forward to having the opportunity to discuss each of those today because this is an incredibly important relationship.”

Pompeo and Wang openly disagreed over which side had called off a two-way security dialogue that had been planned in Beijing this month.

Last week, Vice President Mike Pence stepped up the U.S. pressure campaign against Beijing, going beyond the trade war by accusing China of both “malign” efforts to undermine President Donald Trump ahead of next month’s congressional elections and of reckless military action in the South China Sea.