TEHRAN, October 09 - Italy’s 5-Star Movement on Tuesday ruled out an alliance with far-right parties in the European Parliament after May’s EU elections, but remained undecided over its future partners. 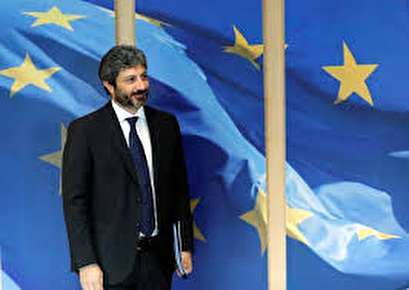 TEHRAN, Young Journalists Club (YJC) -Italy’s 5-Star Movement on Tuesday ruled out an alliance with far-right parties in the European Parliament after May’s EU elections, but remained undecided over its future partners.

The anti-establishment 5-Star Movement rules Italy together with the far-right League. In the European Parliament it sits in the Europe of Freedom and Direct Democracy (EFDD) euroskeptic bloc with Nigel Farage’s UK Independence Party (UKIP).

Its future grouping in the EU assembly remains unclear. The party has tried to join the pro-European liberal group but was rejected.

“There is no doubt that the Movement will never sit together with (Marine) Le Pen,” 5-Star’s Roberto Fico told reporters in Brussels after meeting leaders of political groups in the EU parliament.

Le Pen’s far-right National Rally sits in the EU chamber together with the League, led by Italy’s Deputy Prime Minister Matteo Salvini, in their Europe of Nations and Freedom (ENF) grouping.

Fico, the speaker of Italy’s Chamber of Deputies, said he wanted to meet all political groups before deciding alliances.

His remarks echoed comments earlier on Tuesday by 5-Star leader and Deputy Prime Minister Luigi Di Maio who said his party wanted an alternative group to the right and the left.

Far-right and euroskeptic groups are expected to gain ground in the European elections, according to an aggregation of national polls by Reuters, but their share of seats in the EU assembly is projected to remain well below 20 percent of the total 705 members.