UN Secretary General Ban Ki-moon on Sunday demanded an immediate end to violence in South Sudan, warning that tens of thousands remained vulnerable.
"I demand that all political, military and militia leaders stop hostilities and end the violence against the civilians," Ban told a 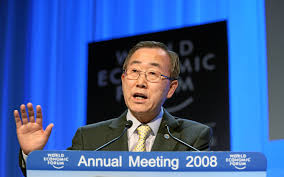 news briefing in Manila as he wrapped up a two-day visit to the Philippines.

He called on South Sudan President Salva Kiir and his rival, sacked vice president Riek Machar to "find a political way out of this crisis" and order their followers to lay down arms.

"I call on them to do everything in their power to ensure that their followers hear their message loud and clear," Ban said.

"Continued violence, ethnic or otherwise, is completely unacceptable and poses a dangerous threat to the future of their young country," the UN chief said.

Six days of fighting between followers of both sides have left at least 500 dead in the capital of the small, but oil-rich African nation, which gained independence from Sudan in 2011.

Kiir has accused Machar of trying to mount a coup, which the latter denies. Machar in turn has accused the president of carrying out a bloody purge.

Tens of thousands have already been displaced, and Ban said up to 40,000 people have sought refuge in UN camps across the country, which appeared to be on the brink of civil war.

In the latest hostilities, four US servicemen were wounded in an attack on their aircraft as it was on its way to evacuate Americans from the rebel-held town of Bor.