West intended to reinstate its underdog dictator in 2009

Tehran, YJC. Larijani says had the same disturbances as that of 2009 Iran happened in the US, either the state would have fallen or thousands have got killed. 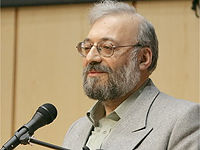 The head of the Human Rights Staff of the Judiciary of Iran said "America’s enmity with Iran has two reasons. First is that their cultural stance which stems from their arrogance and racism and second that it is fatal to them if someone in the region stands against the US. If at some instances the US has not taken action against Iran it is not due to respect. It is for their set-backs in case of action.”

"A few months before the 2009 elections I went to France. There some official told me ‘In Europe we are unanimous that there can be anyone but Ahmadinejad,’” he said.

He added "The sedition was not a misunderstanding. It was a move by the US and by the Zionist West and it was because they could not attack Iran.”

I have something against "win-win”. Someone has come in our house and trespassed and has taken our assets in hand and we say win-win.

"In we set one inch back in relation to the West they will come forward to the end. We are the harbinger of the Islamic world and our defeat against the West means the defeat of Islam. We must talk to the world but we must not bow down before their excess,” Larijani exclaimed.

He also pointed to the West’s harsh response against military threats and said "70 people were killed in a civil movement in the Wall Street movement.”