TEHRAN, November 03 -Leaders of China and the Dominican Republic have held talks in the capital Beijing, pledging to expand ties months after the Latin American nation switched its allegiance to the vast Asian country from the self-ruled island of Taiwan. 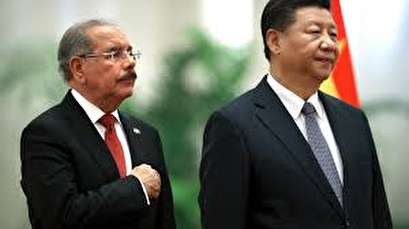 TEHRAN, Young Journalists Club (YJC) -Leaders of China and the Dominican Republic have held talks in the capital Beijing, pledging to expand ties months after the Latin American nation switched its allegiance to the vast Asian country from the self-ruled island of Taiwan.

Dominican President Danilo Medina met with President Xi Jinping after a formal welcome ceremony at the Great Hall of the People on Friday.

Xi expressed his country’s willingness to work together with the Dominican Republic in accelerating the development of relations and turning the vision of cooperation between the two countries into more tangible results.

The Chinese president called on the Dominican Republic to adhere to the One-China Policy so as to lay a solid foundation for the lasting and stable development of bilateral relations.

Medina, for his part, expressed admiration for China's economic achievements, stressing that the establishment of diplomatic relations with Beijing was in the interests of the Dominican Republic, and that his country sought to develop closer relations with China and deepen friendship between the two peoples.

Beijing also said it was willing to import more competitive and high quality products from the Dominican Republic and enhance the bilateral trade, adding that the two countries should expand people-to-people exchanges and tourism cooperation.

After the meeting, the two oversaw the signing of 18 agreements to cooperate in a variety of areas from finance to civil aviation.

The Dominican Republic opened its new embassy in central Beijing on Saturday, with Medina and Chinese Foreign Minister Wang Yi unveiling a plaque commemorating the occasion.

Speaking at the ceremony, Wang praised the Dominican Republic's decision to sever ties with Taiwan, which Beijing considers a breakaway province, saying China and the Caribbean island nation were "writing new history."

Wang said the decision to switch diplomatic relations to Beijing “serves the fundamental interests of the Dominican people and completely conforms to the trend of the times.”

Dominican Foreign Minister Miguel Vargas said that by opening the new embassy, the two countries were "opening a very relevant chapter in the international relations of the Dominican Republic."

The Dominican Republic and El Salvador both broke their diplomatic ties with Taiwan earlier this year.

Taiwan reacted angrily to the Dominican Republic’s move, with its top diplomat claiming that China had offered financial incentives to attract the Caribbean country’s support.

Beijing’s relations with Taipei have noticeably strained since Taiwanese President Tsai Ing-wen rose to power in May 2016, mainly due to her refusal to embrace the position that Taiwan and China are part of a single country.

Most countries in the world adhere to the One-China Policy, according to which self-ruled Taiwan is considered Chinese territory.

Taiwan and the mainland separated amid civil war in 1949. Beijing has vowed to bring the island under its control by force if deemed necessary.

President Xi has declared that the issue of bringing Taiwan under Beijing’s control cannot be postponed indefinitely and some analysts believe he is determined to accomplish that feat during his time in office.