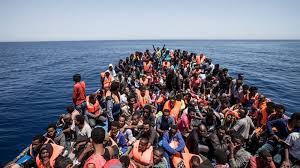 TEHRAN, Young Journalists Club (YJC) - The service says Tuesday that it rescued 80 people Monday, including five women, from two boats and recovered the bodies of 13 dead migrants in the Alboran Sea, part of the western Mediterranean migrant route into Europe. They were all transferred to the Spanish enclave of Melilla, which borders Morocco.

In a separate incident, the Spanish Civil Guard says it found four bodies of migrants and 22 survivors, all men from northern Africa, after the wooden dinghy in which they were travelling hit a reef close to the coast west of the Strait of Gibraltar.

The U.N. says over 2,160 people have died trying to cross the Mediterranean to Europe this year.